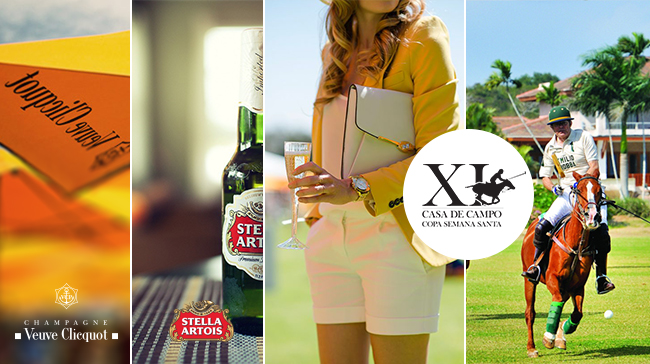 Taking place on Saturday April 4th, with celebrations and activities throughout the day from 11am to 7pm, the finals of the 11th annual Casa de Campo Copa Semana Santa polo tournament hosted by CasaLife Magazine are being sponsored by Veuve Clicquot, Stella Artois, Azimut and Casa de Campo.

Known as the “Sport of Kings”, the sidelines of polo fields is where the spectators themselves take part in a high stakes game of fashion. The dress code is “whimsical chic with a touch of polo”, so if you’re ready to debut your Polo Style, join us for the red carpet opening at 11am. Sponsored by CasaLife and Stella Artois this is your opportunity to strut your unique #polostyle.

Immediately following the end of low goal final (approximately 3pm) Veuve Clicquot cordially invites you for the traditional “divot stomping”. Spectators are encouraged to converge on the field to stomp down the turf that has been torn up by the pony’s hooves… add in a glass of Veuve Clicquot and you’ll be surprised at how much fun this is!

And finally… Grab a glass of champagne and take your seats, because 4pm is the moment to enjoy some of the best polo the Dominican Republic has to offer – the high goal finals of the Casa de Campo Copa Semana Santa.

The celebration will end with live music, dancing and the awards ceremony at 6pm.

It’s the place to be this Sábado Santo. #CasaLifePolo