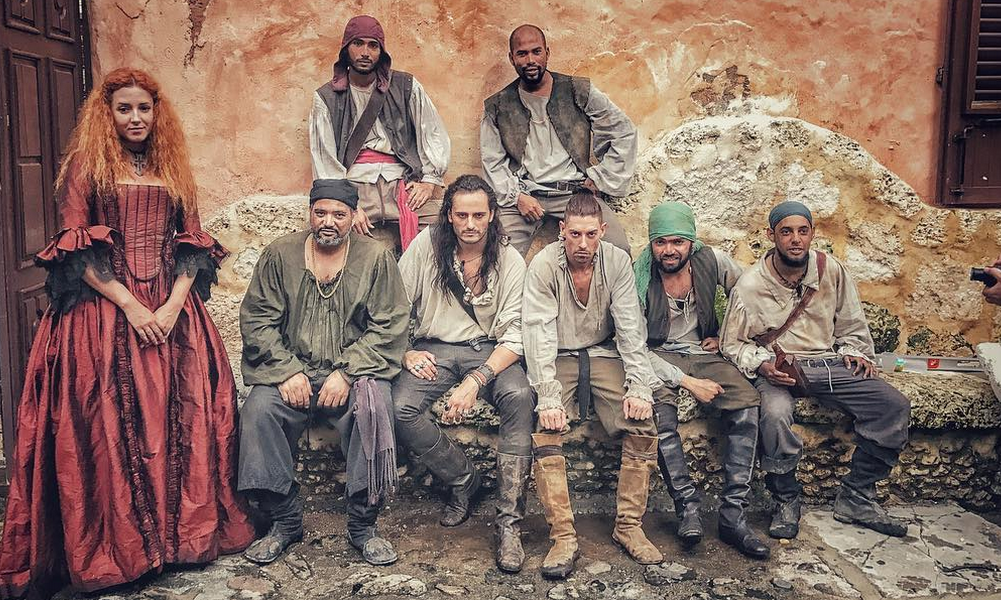 Velvet fans are probably WELL AWARE that Raul de la Riva (Asier Etxeandia) and Pedrito Infantes (Adrian Lastra) are in Casa de Campo and loving every minute of it! They are the lead actors of a film being shot at Altos de Chavón called Nadie Muere en Ambrosia…and you guessed it: Ambrosia is the one and only Altos de Chavón in the movie!

I must confess, I’m a hardcore Velvet fan, so I’ve pretty much freaking out all week seeing my favorite Velvet actors dressed up as pirates and goofing around our cherished Village of the Artists.

For the Non-Velvet fans who are wondering why the big fuss, let me fill you in: Velvet (also known as Galerías Velvet) is a Spanish television series produced by Bambú Producciones for Antena 3. The main storyline of the show is the love story of Alberto (played by Miguel Ángel Silvestre), heir of Galerías Velvet, one of the most prestigious fashion stores in the Spain of the late 1950s, and Ana (Paula Echevarría), who works as a seamstress there. (Thanks for the succinct description Wikipedia!)

Both sporting hair extensions on set (we take it pirates could care less about getting haircuts), Adrian and Asier are having a grand ‘ol time in Casa de Campo, sharing every minute of it with their fans.

Frank Perozo, Nashla Bogaert and David Maler have also been seen on set, eating at La Cantina and posting pictures with the Spanish actors on Instagram. We take it they are also part of the film’s crew.

So what do we know about this film? It’s Instagram page says: “Nadie muere en Ambrosía| A place erased from the maps and history books where death is no where to be seen and rum is law | Release Date 2018 | www.visitAmbrosia.com”

The official Instagram page also goes on to mention the leading members of the crew, which include Hugo Silva, Macarena Gomez, Jalsen Santana and Gerardo Mercedes.

While we wait for more details from the producers, we are already beyond excited that our dear Altos de Chavón serves as the main set for this film, which features and incredible cast and what seems to be a very entertaining plot! Stay tuned!