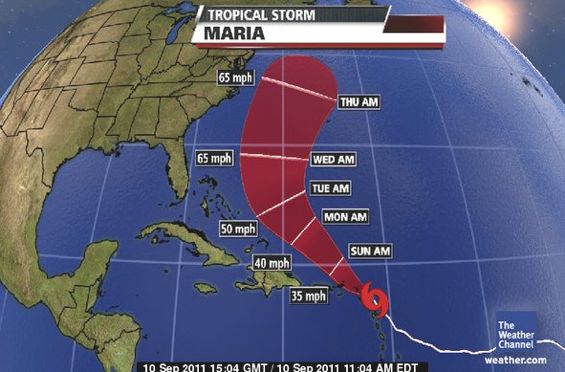 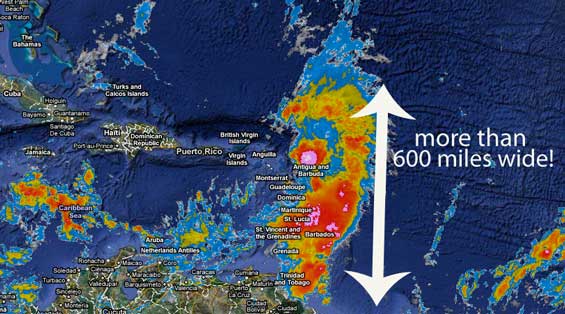 Have you had enough of the rain? Me too! Unfortunately, it seems our prayers to the rain gods have been left un-answered – with Tropical Storm Maria expected to head North, it should be time to sunbathe again, but given that Tropical Storm Maria is now more than 600 miles wide (or long rather)…..she may yet have a sting in that giant tail of hers……..

YES!!! Sadly Maria is more than 600 miles long (see diagram), which means that unless she moves directly North (which is not going to happen), the Dominican Republic, La Romana and Casa de Campo WILL be caught in that massive tail of hers…….and that means RAIN!

What does this mean for the Dominican Republic and more specifically Casa de Campo and La Romana?

THE GOOD NEWS!
In Casa de Campo, there is always good news and it is that TODAY (Saturday) it is NOT expected to rain at all! Which means the planned Ballet show, which will take place this evening at 8pm in the Altos de Chavón amphitheater will go ahead as planned! Yipppeeee!
To find out more about the ballet click here!

We suggest that you follow the movements of Tropical Depression Storm Maria closely so that you can be fully prepared, the below links are fantastic sources for keeping up-to-date:

ONAMET.gov.do – the Dominican Republic’s official weather warning people (this one is in Spanish)