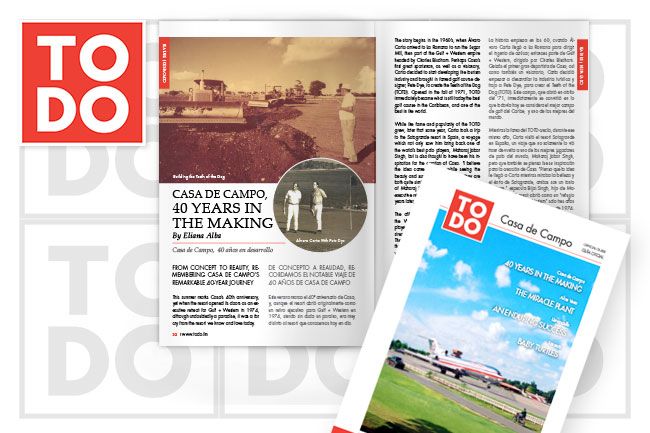 The summer issue of TODO Casa de Campo has just arrived, and in this, our 10th edition of our essential guide to all things Casa de Campo, we proudly celebrate the 40th anniversary of our beloved resort.

This summer, the Casa de Campo resort is officially celebrating it’s 40th birthday. Although the Teeth of the Dog was officially inaugurated in 1971, it wasn’t until 1974, that the resort we know and love was officially opened. And boy has it changed since then! Over the last 4 decades, Casa de Campo has slowly, but surely grown and improved, now boasting not only the best facilities (sports and otherwise) in the entire Caribbean, but also a thriving community. In this issue of TODO Casa de Campo we invite you to re-live Casa de Campo’s remarkable 40 year journey, we hope you enjoy the read! (You’ll certainly love the vintage photos by Carol Burke!)

In this and all editions of TODO Casa de Campo you will find; a calendar of events, services guide, maps, activity and sports rates, phone numbers, as well as numerous fun and entertaining feature articles and sections, such as:

The following images give you a sneak preview of what this issue of TODO Casa de Campo has to offer:

Do you receive TODO and CasaLife? If you have not recieved the previous issues of TODO Casa de Campo at your villa, it is possible we do not have the most up-to-date contact info for you… PLEASE CLICK HERE TO FILL OUT A SIMPLE FORM TO ENSURE TODO REACHES YOU!