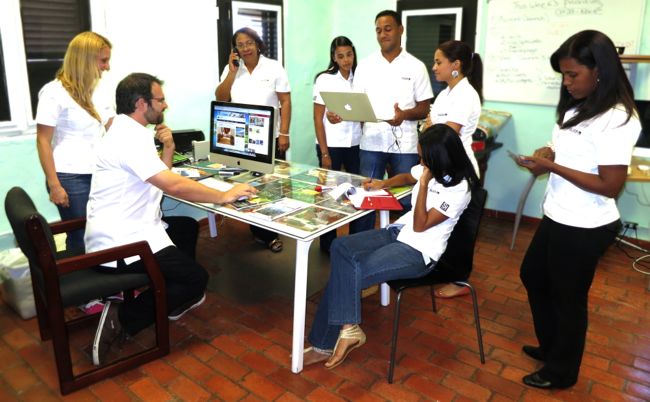 May 1st is International Worker’s Day, but here in the Dominican Republic the celebration has been moved to Monday April the 29th.

This is a national holiday in the Dominican Republic and in many countries around the world.

On this occasion it is worth mentioning the work of Julio Cordero Rijo, who has worked for the Casa de Campo resort of 41 years.

Native to Higuey in La Altagracia province, Cordero (as their friends of Silgon call him) is janitor for Silgon Inc., La Piazzetta restaurant, at the Dye Fore Pro Shop, the Fundación MIR and the pool area of Dye Fore golf course, but throughout his career he has not always done the same.

He said that he is very happy and satisfied with his work because it has allowed him to bring up 5 children.

This humble and kind man is one of the 900 employees currently  on the Casa de Campo resort pay role.

The Casa de Campo resort like the Central Romana Corporation is one of the companies that employs the most people in La Romana. Their workers come from all La Romana, San Pedro de Macoris and across the Dominican Republic as well as abroad. The Casa de Campo resort workers distributed in the Marina area, Altos de Chavon, the Casa de Campo Hotel, bars, restaurants, and more. Their work ranges from waitresses, clerks, concierge, chefs, secretaries, technicians, designers, security, etc.. and there are many more workers in Casa de Campo working for all the private villas and businesses.

Every day these men and women leave their families at home and head to Casa de Campo to make a living. Congratulations to all!

The History of  International Worker’s Day

The creation of the International Worker’s Day holiday dates back to the execution of several workers in the United States, specifically in Chicago, Illinois. These unionist anarchists were executed for their involvement in days of struggle for achieving the eight-hour workday. The conflict began on May 1886 with a strike and the sour point came three days later, in an event called the Hyamarket Affair, where dozens of workers died.

Later, eight workers were tried over the demonstration, five of them were sentenced to death and three were detained. Their names are Augustus Spies, Mguel Schwab, Samuel Fielden, Albert R. Parsons, Adolph Fischer, George Engel, Louis Lingg and Oscar Neebe.

The fight was hard, but finally at the end of May 1886 several sectors employers agreed to grant the eight hour day to several hundreds of thousands of workers.

Three years after the incident, on the 1st of May, the first Labor Day celebration was held – thanks an agreement made by the Socialist Labor Congress held in Paris in 1889. It was a day of struggle and a tribute to the “Martyrs of Chicago”.

A curious fact is that in the United States and Canada they do not celebrate this anniversary, but in these countries “Labor Day” is celebrated on the 1st Monday in September, with a parade held in New York, organized by the Noble Order of the Knights of Labor. President Grover Cleveland, decided to hold the celebration in September for fear that the May date would strengthen the socialist movement in the United States. Canada joined the US to commemorate the first Monday in September instead of in May from 1894.