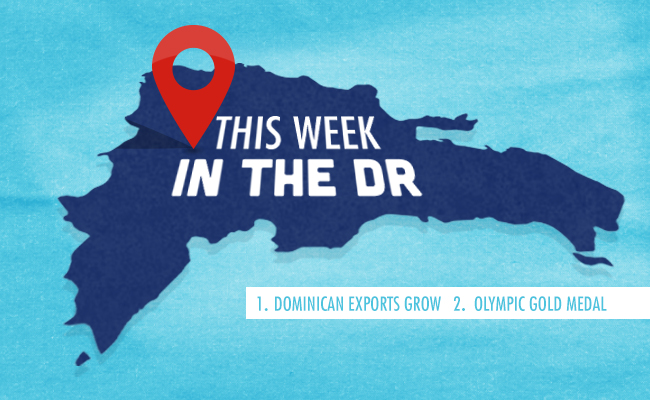 It’s the last day of July, and the last day of the working week… time to welcome the weekend, people! Finish off your week with our weekly summary of the country’s most relevant news, This Week in the Dominican Republic.

This week the Dominican Republic obtained another olympic gold medal, just like last week in the Pan Am games held in Toronto, and it was just announced that the country’s exports grew 67% over the last 10 years!

Dominican Republic Export and Investment Center (CEI-RD) director, Jean Alain Rodriguez, stressed that the numerous initiatives to promote exports and investment in the country will “create thousands of jobs and contribute to a higher growth of the Dominican economy”.

Last Thursday, July 30th, the Customs Agency (DGA), now in its sixth year of operation, destroyed bootleg alcohol and goods worth around RD$476.3MM.

Also destroyed were two boxes of belt buckles worth around RD$131.2 million and various other goods with an estimated value of RD$305.8 million.

The Santo Domingo native not only stood atop the podium in the 200M Freestyle, but she also won Silver in the 4x100M.

The Special Olympic World Games is one of the largest sporting events in the world, and is held every four years. This year the World Games were held in Los Angeles from last Saturday, July 25th to next Sunday, August 2nd.

Last Thursday, July 30th, Colombian police arrested the secretary of a senior official of the Attorney General and four others allegedly linked to a smuggling network when they entered the country with more than US$1 million hidden in her luggage, said officials in Bogotá quoted by EFE.

Carmen Sofia Carreño, secretary of Attorney General Technical Investigation Corps (CTI) director, Julian Quintana, was arrested in Bogota’s El Dorado International Airport and with her a man who accompanied her and her daughter as they returned from Dominican Republic.

Two other people were also arrested in the operation according to the Presidency in Bogotá.

Colombian President, Juan Manuel Santos, said US$1.08 million was seized from the travelers, adding that two of the detainees belonged to the Administrative Security Department (DAS), an agency disbanded several years ago after an illegal wiretapping scandal.