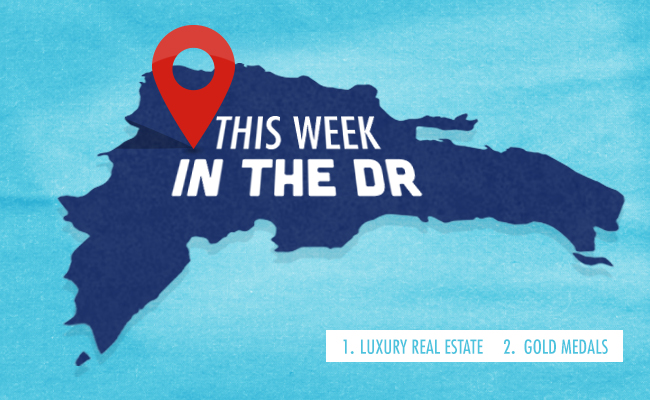 It’s been a great week for Dominican Republic! At the Toronto Pan Am games 2015, while our female volleyball team lost its match last night, the Dominican Republic took 2 gold medals with Lugelín Santos (400m sprint) and Ana Villanueva (karate). Meanwhile a Real Estate Luxury project from the Sansoucí Group is ready to start in Santo Domingo- forecast to provide thousands of new jobs and give a real boost to developments in the Eastern part of Santo Domingo.

Work is ready to begin on a new luxury real estate project in Santo Domingo. The “Sansoucí” project will be located on the eastern side of the Ozama River at the port of Sansoucí (on the Caribbean Sea). The project represents an investment of approximately 1billiom.

Occupying 485.00 m2, this is will be the largest luxury real estate project in the area and will be located at the former location of the Dominican Naval Base on 27 de Febrero.

This real estate project seeks to develop 3,000 homes in the Eastern Zone of Santo Domingo, and will also incorporate buildings, restaurants, hotels, a cultural and commercial center, schools, a medical clinic and other facilities include a strip of beach, in addition to the luxury residences.

The project is part of the Sansoucí Group, a group of private shareholders of long business tradition and development of high success industries across the Dominican Republic, Central America and the Caribbean.

Agents of the International Criminal Police Organization in Santo Domingo, arrested and extradited 57 “dangerous” foreign citizens that had settled in the country to avoid persecution by the authorities of their respective countries.

According to the police agency, these alleged had continued their criminal activities in Dominican territory, and having been arrested in different parts of the DR were then handed over to the authorities of their own country. They were discovered and arrested in different areas, mainly in Santo Domingo, Santiago and Puerto Plata, and came to the country from Cuba, Mexico, Russia, Slovenia and the Czech Republic among others.

Last Sunday, July 19th, President Danilo Medina authorized the construction of a storage facility for plantain growers in the western town, Tamayo, and the installation of solar panels to irrigate around 126 hectares.

After meeting with the heads of AUHAPRO (the farmers association), Medina said solar panels will power the pump as an immediate solution to the lack of electricity. “The first thing to do is to make money, and to make money you have to get this agricultural project going, and it cannot be started if there’s no power for the water”. Said President Medina.

Medina added that the pump will let farmers increase plantations by 126 hectares to grow plantains and other items for breakfasts served in local schools.

Dominican-based airline, Pawa Dominicana, spent US$30 million to launch operations in the country starting from August 14th. In its first stage, Pawa will offer 24 weekly flights to Aruba, Curacao and St. Maarten

According to Barrios, flights will serve to haul domestic exports, especially agro products, to Pawa’s destinations and improve the local market’s competitiveness.

The Caribbean’s routes will count with DC-9 100-passenger aircraft and MD-80, of 160 passengers, or 3,200 seats per week and 12,900 a month, Barrios said, adding that Pawa currently has seven aircraft.

What Santos failed to do in the PanAm Games in 2011 became a reality in Toronto four years later with gold in the 400 meters, and his best season time of 44.56, the second time he clocks under 45 seconds in the current season.

“For me, this achievement is very important. It’s the second gold for the Dominican Republic delegation.” Said Santos.

In karate, Ana Villanueva (under 50 kg), won gold for the second time in her career, beating Gabriela Bruno from Chile 5-0 in the final.