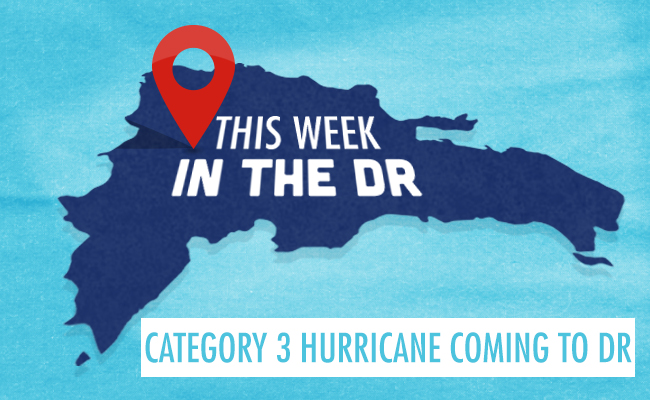 We just found out that Hurricane Danny escalated really quickly into a Category 3 hurricane and is expected to reach the Dominican Republic by Tuesday. And although predictions have Danny decreasing its intensity and maybe even disappearing on its approach to the country, it’s certainly something to be aware of… and prepare for!

Last Thursday, August 20th, finance minister, Simon Lizardo, said the Dominican government bought insurance to acquire oil in international markets at a US$65 cap per barrel to protect the country from the world’s volatile crude prices.

Italy seizes 122 kilos of cocaine on ship from Dominican Republic

On Thursday, Italian and Spanish antinarcotics agencies seized 122 kilos of cocaine at the Italian port of Vado Ligure on a ship from the Dominican Republic.

During customs investigations in Spain, it emerged that one of the holds could have an undetermined amount of cocaine that could’ve been loaded at the Colombian port of Turbo, hidden with legal freight.

Today, the National Hurricane Center (NHC) in the US, announced that the Hurricane Danny became a dangerous Category 3 cyclone, with maximum sustained winds of 185km per hour on its way to the Lesser Antilles.

The Miami-based institution said, however, that “there won’t be any further intensification” while Hurricane Danny moves into an area “affected by wind shear in the upper layers”. Therefore, meteorologists predict that the hurricane “will begin to weaken in the afternoon”.

In a special bulletin, the NHC explained that Hurricane Danny is at 1,450km to the east of the Lesser Antilles and is moving west-northwest at a speed of 17km per hour.

It is expected to remain that way until Saturday night, when it will turn west. Hurricane Danny is expected to start effecting the Dominican Republic by Tuesday or Wednesday of next week.

Since the Atlantic Hurricane Season officially began on June 1st, there have been four tropical storms Ana, Bill, Claudette, and Danny, the latter which transformed into the first hurricane of higher category (3) of the season.

Experts in atmospheric science at Colorado State University predicted last August 6th that the current hurricane season will be “well below average”, with five tropical storms and two hurricanes. This low activity, they explained, is due to the development of El Niño phenomenon in the Pacific, which inhibits the formation of storms in the Atlantic.