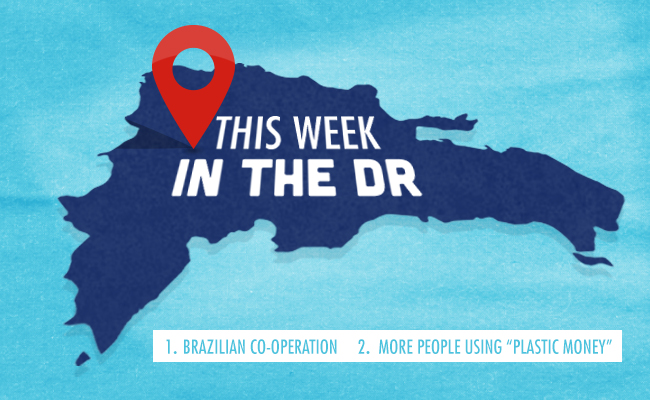 Unless you’re Jake Gyllenhaal’s mother from the “Bubble Boy” movie, you know it’s not good to be restrained inside of such thing (for those needing help with the movie reference, basically it’s not good to be enclosed in a bubble and not knowing much from the outside world). That’s why we bring you our weekly digest of the most important things happening outside Casa, This Week in the Dominican Republic, aiming to keep you up to date with the country’s news.

This week was pretty active in business matter; Brazil re-ensures its commitment in cooperating with the Dominican Republic, the preference for plastic money by Dominicans grows, investments plans in the border, and food imports increase.

Brazil to cooperate with Dominican Republic

The government of Brazil states cooperation with Dominican Republic is a priority, re-ensuring its commitment with funds for technical support to more than 10 projects concluded or underway in education, planning, health, meteorology, safety and environment and equipment for and industrial textile workshop started on June 24 in the village of Consuelo, San Pedro (east).

The Brazil Cooperation Agency’s (ABC) director, Fernando Marroni, noted that for diversity, the number of institutions involved in the projects and the results “are an indicator that Brazil prioritizes cooperation with the Dominican Republic” and noted the conclusion of four large projects from 2013 to 2015.

The Quisqueya Binational Económc Council (CEBQ), is developing a project of investment in the Dominican-Haitian border whose launch is imminent.

Dominican Republic representatives, Juan B. Vicini and Fernando Chaplain, and organization secretary, Rafael Paz, said to expect the projects in progress to have an economic impact on the border region and invited entrepreneurs to get involved.

Also adding that the development initiative is focused on four key points of interconnection between Dominican Republic and Haiti, aimed at transforming them into a hub for economic growth and creating jobs on both sides of the border. The four areas of development are Manufacturing and Logistics; hydro and wind power generators; agriculture and livestock; and finally Tourism. “For all these, studies have been conducted for confirming the potential and feasibility in order to ensure tangible results in three to five years”, said Rafael Paz.

In March, the Dominican Republic received 230,400 tons of food products valued in US$220.5 million from 82 countries, an increase of 17% in comparison with February.

As listed by the Industry and Commerce deputy minister, Anina M. Del Castillo, in the Internal Commerce monthly report, the countries with the most imports to our territory were as follows:

Dominicans increasing use of credit cards

The Association of Commercial Banks of the Dominican Republic (ABA) says that credit card usage has had an increase of 20% as of 2014 (RD$227.32BB), or RD$38 billion more in comparison with 2013 (RD$188.59BB). “This shows there is an increasing preference by Dominicans for plastic money”, said the association.