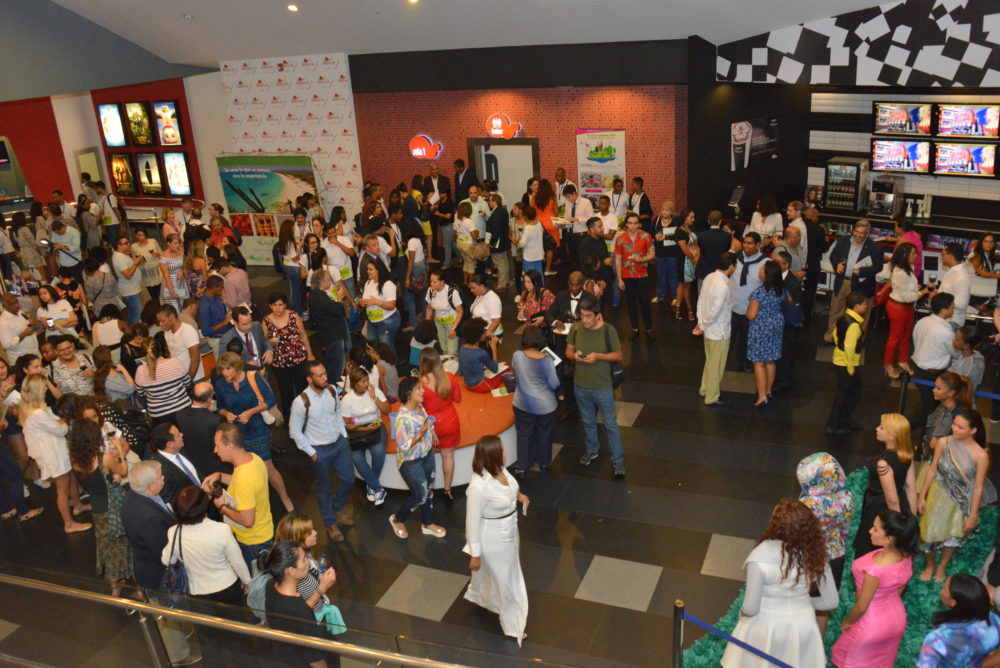 Not long ago, the Dominican Republic Environmental Film Festival (DREFF) held its sixth edition in the country, this year under the theme “Yo soy sostenible” (I am sustainable). Many films were presented in an effort to bring awareness to environmental changes and harmful industry practices within countries around the world, and included issues on public policies, clean water, alternative energy sources, and sustainable socioeconomic development. Institutions and businesses around the country held screenings, community activities, and events with environmental leaders and special guests to promote DREFF, which first began in 2011 as an initiative of the Global Foundation for Democracy and Development.

Still from “The True Cost”

The festival opened with the documentary directed by Andrew Morgan, “The True Cost” at the Palacio del Cine in Agora Mall, which tore deeply into the profound effects of “fast-fashion” on our environment and those who make our clothing. “Fast-fashion” refers to brands and retailers producing an alarming number of garments for mass-consumption to stay on top of or even ahead of trends. An industry that used to have two fashion seasons, Spring/Summer and Fall/Winter, the fashion industry now churns out 52 “micro-seasons” with the goal of selling as much product as quickly as possible. Among the many downsides to fast-fashion is overconsumption and waste, harmful environmental practices, and devastating poor-working conditions overseas to meet production standards.

The film covers footage from the 2013 factory collapse in Dhaka, Bangladesh where Rana Plaza, an eight-story building collapsed and killed over 1,100 employees in one day. The factory, home to a number of popular Western retailers, had long-ignored infrastructure problems and sought to fulfill competitive production orders over safety precautions, exemplifying the high costs of meeting demand and severity in poverty to justify cutting corners. Earning less than $3.00 a day, Bangladesh sweatshop workers are among the lowest-earning individuals in the world, and yet the country is one of the world’s largest exporters in the garment industry. The film also sited the debilitating effects on health and the environment from pesticide-infused cotton fields in India, chemical exposure in tanning and shoe factories in Kanpur, as well as the massive pollution in Haiti where a good portion of our donated-used clothing end up in landfills! Fashion happens to be the #2 most polluting industry on earth, following the oil industry. The New York Times calls the documentary, “A portrait of exploitation.”

There to introduce the film were environmental activists within the fashion industry, Zaida Goveo, Coordinator for Fashion Revolution in Puerto Rico, Gina Constanza, Founder of “Eco Fashion in the Park,” and Chavón School of Design’s own Fashion Director, Marina Spadafora. Fashion Revolution is a non-profit community interest company aimed at involving the global community in thinking differently about what we wear – ‘transparency in transforming the industry’. Their 2016 campaign #whomademyclothes? asks brands to reveal their suppliers, and so far has been met with an overwhelming response of producers and garment workers sharing their stories in #imadeyourclothes. Zaida is also a textile artist who works solely with organic fibers and recycled materials in her project, BALMASEDA to strengthen a relationship among consumers with nature.

“Eco Fashion in the Park” collection displayed at DREFF

Gina’s work in “Eco Fashion in the Park” has been met with a lot of success through her initiatives of organizing clothing swaps throughout New York City and promoting  independent and eco-friendly designers. Her latest collaborative collection was displayed at the DREFF’s launch before the screening. Marina, the Creative Director behind her brand, “Auteurs du Monde,” traverses the globe from India, Nepal, Vietnam, Peru and Ecuador, among other countries, sourcing ethical fashion from producers who belong entirely to the World Fair Trade Organization. She also holds the position of Italy’s Country Coordinator for Fashion Revolution and is a member of its Global Advisory Committee for Europe. In addition, she works with Fashion 4 Development – a global platform that along with the United Nations serves to aid emerging economies through fashion. In 2015, she was awarded the “Women Together Award” which acknowledges those who are dedicated to sustainable development and the eradication of social injustice and poverty.

The term “conscious consumerism” comes to mind after viewing the film and learning more about those who have formed careers molded around improving industry standards. Think how our actions, as simple as shopping, affect humans, like us miles away. Andrew Morgan says it well as he reaches the mindset of many mainstream consumers:

“This is a crazy part of our world, and it’s horrifying that I’ve never heard of it. Like how did I live this long in my life without even considering something as basic as where my clothes came from…What I found is that while I hadn’t asked some of those questions, there’s really a lot of us who haven’t asked some of those questions…[The film] is an invitation to say ‘hey, that’s something really important in the world that you’ve not considered, and you are a part of something intrical just by buying clothes.” (truecostmovie.com)

The Chavón School of Design within its fashion program puts a strong emphasis on sustainability and fair trade under their course “Ethical Fashion” led by Marina Spadafora. Stay tuned as we bring you more information on Chavón’s environmental focus on fashion, and in the meantime if you’re interested in learning more of where your clothes come from, we recommend seeing the documentary, “The True Cost,” and joining the initiatives mentioned above. For further reading, check out the book “Where am I Wearing?” by Kelsey Timmerman who, like Andrew Morgan, joins the quest of conscious consumerism and brings to light the cost of our buying habits on the environment and on individuals around the world. This costs at what costs?

The following photos are provided by DREFF, taken on September 13th during the inauguration of the Dominican Republic Environmental Film Festival at the Palacio del Cine in Agora Mall for the feature film “The True Cost.” For more information on environmental films and initiatives visit, dreff.org.