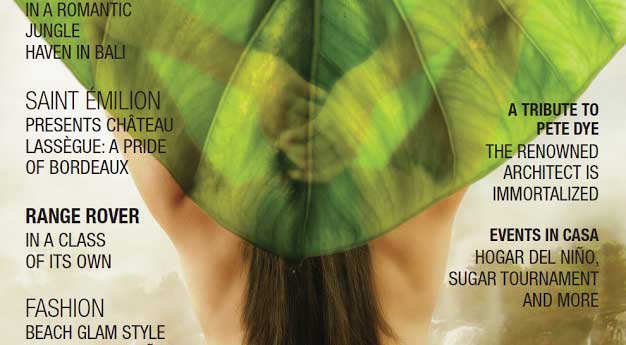 Having celebrated the the start of CasaLife’s 8th year with a cover party at The Club restaurant in Altos de Chavón in April, we are thrilled to announce that the summer issue of CasaLife, Casa de Campo’s resort and resident magazine has just arrived!

As this summer marks the 100th anniversary of the Central Romana Corporation, of which Casa de Campo is part, in this issue we share with you an interview with Alfonso Fanjul, Chairman and Chief Executive Officer and J. Pepe Fanjul, Vice Chairman, Chief Operating Officer, and President, as a tribute to their company’s impressive history, achievements and vision for the future.

Committed to bringing you the best coverage of Casa de Campo’s most elegant and important occasions, in this issue you will also enjoy coverage of the CasaLife cover party, the annual Sugar Golf and Sugar Shooting tournaments, golf tournaments; the British Golf Cup, the Ambassadors Cup with the AMCHAMDR and the Caribbean Classic founded 18 years ago by Gilles Gagnon, Casa de Campo director of golf.

Also included is the wedding of Ernie Villar and Mariela Garcia-Velez, daughter of Calixto Garcia-Velez, Casa de Campo’s director of polo, who exchanged vows at the Altos de Chavón church and celebrated later at the La Romana Country Club in Casa de Campo.

Another special event featured is the 16th annual Hogar del Niño Fundraising Weekend – a wonderful philanthropic gathering with sporting events for all the family and a fun “beach party” at Minitas Beach for the closing celebration.

Within News in Casa we reveal a sneak-peak into some of Casa’s many other events and activities; A Private Artistic Affair at Punta Minitas; the Annual McDaniel Tennis Tournament Raises More than US$46,000; Vanta Windows and Doors Unveils Its New Collection; Emilio Robba Presents New Works Of Art in Altos De Chavón and Toy Box Luxury Rentals Opens in the Marina Casa de Campo.

In addition in this, as in all editions of CasaLife, you’ll find ‘Luxury Lifestyle’ features on shopping, fashion, automobiles and yachts, such as an insight into the new Chivas Regal – Pinifarina collaboration.

A stunning collaboration between Chivas and Pinifarina