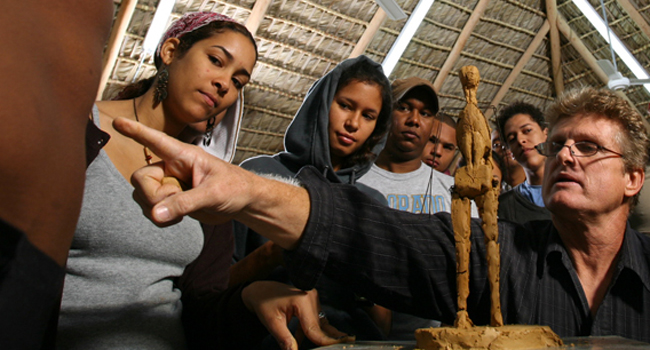 The artist Mark Lineweaver, who is also a teacher at the Altos de Chavón School of Art and Design has 19 years teaching sculpture, drawing and 3 dimensional design to the students. Mark, who considers himself as a sculptor, who delves into painting, here he shares with us his story as an artist and his experiences in the Chavón School.

“My first real experience sculpting figuratively was in Paris in the early 80’s” begins Mark.

When in Paris he met a fellow American sculptor who had a studio on Rue de Mont Louis, from whom he rented a small space and did a self portrait. “My first and only”, he added.

“I did it because I wanted to learn at my own pace and the model was cheap. I must have done something right because I received a few commissions. I think that it was in the European museums that I got the best education. Paris was nice, but after 4 years I figured that I had learned what I could – some basic stuff about sculpture and some street french”, he said.

It was in the fall of 1986 that he landed in New York City looking for a real school with a broader base. He wandered into the New York Academy of Art on Lafayette St. next door to the Shakespeare Theater…

And graduated from the Academy four years later with a masters in Sculpture. It was during his years at the academy as their official portrait sculptor that he got his first real feeling for portrait sculpture.

Since then Mark has created numerous incredible portrait sculpture for prominent figures the world over – including the “Hermanas Mirabal” (Mirabal sisters), who fought against  the dictatorship of Rafael Leonidas Trujillo held from 1930 to 1961 in the Dominican Republic.

“I think my first sitter was Christopher (kip) Forbes who wanted a french-style bust. It was seen by his father Malcolm who then asked If I could do the same for him. We did the bust in his town house in the Forbes building on 5th Avenue. It was a humbling experience as we were surrounded by works of art normally seen in the Met,” he said.

Teaching in the Altos de Chavón School of Art and Design

Mark Lineweaver arrived in Altos de Chavón in the fall of 1990 – a nervous and excited “Artist-In-Residence”. His contact with the school began at the same time. He taught a few years during the winters and summers doing sculpture and drawing classes and in 1994 he was ready to teach full time.

“This year completes 19 years teaching sculpture, drawing and 3 dimensional design. I look forward to next year with the same excitement as I have every year.  Being part of the Chavón experience has been very rewarding. Seeing our graduates successfully employed as artists and designers around the world is the best testament to the vision that was Charles Bluhdorn’s. I think the School of Design is an important dimension to the Casa de Campo experience.”

The artist explained that each bust is unique and is a combined effort between the artist and sitter. The more detailed the piece – the more the time and expense. An is example a terra-cotta bust. A terra-cotta bust is expressive and can be done in two or three sittings with a little help from photos. The cost varies according to the artist but a credible bust should be in the range of US$2,500 to US$5,000.

“I recently had the pleasure of working with long time Casa de Campo resident Norma Rubel We did several sessions at their villa – where Roy, her husband, was a great help with critiques. He has a great eye and should probably be sculpting. If things work out he will get busted next season”, he added.

On Friday the 8th of March 2013 at The Gallery in Altos de Chavón, the final component of Art Chavón 2013, a fundraising event for the Altos de Chavón School of Art and Design, was a talk by Mark Lineweaver on Scuplture – and it was awesome!

On Thursday December the 2oth 2012, artist Mark Lineweaver, who is also a teacher at the Altos de Chavón School of Art and Design celebrated the opening of his new exhibit “Flora y Fauna” at the Altos de Chavón art gallery amongst a very impressed crowd of Casa de Campo villa owners, residents and visitors as well as of course many enthusiasts from the art loving community of Altos de Chavón.