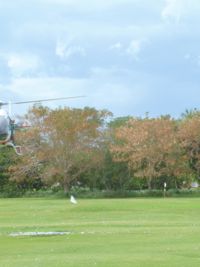 Despite a spot of rain for good luck, Saturday the 19th of February was a perfect day for golf, with over a hundred golfers taking part in the Hogar del Niño Golf Tournament at the La Romana Country Club.

With so many enrolled players the tournament was spilt into 2 halves to accomodate everyone, with the first group of players teeing off at 8:30am and the second group teeing off at 1:30pm.  Both groups of players, whether they played in the morning or the afternoon enjoyed a fun round of golf played as a ‘scrabble’ so that randomly selected groups of friends and new friends worked together to get the best possible score!

As well as the golf, the Hogar del Niño had turned the La Romana Country Club into a social hub for the days activities (tennis, golf and biking) with a McDonalds stand, where hungry participants (and greedy reporters) could enjoy a burger and chicken nuggets, as well as a hot dog stand and plenty of drinks stands serving beers, waters and sodas.

Before the second group of golfers set out, the exciting helicopter ball drop took place. Members of the community – golfers as well as the non-golfers purchased numbered golf balls which were then dropped, tossed and thrown via helicopter down towards a hole in the La Romana Country Club driving range. The winners were the lucky people who’s ball landed inside the hole! 3 years ago no balls landed in the hole, last year 2 balls landed inside the whole (so the ‘pot’ was divided between the winners) and this year 5 balls went inside the hole….which makes me wonder how big this hole is! This year’s winners were Michael Magdol, Jean Dye, Roberta Kriss and J.J. Suarez – that´s only 4 winners for 5 balls, because Michael Magdol got extra lucky and 2 of his balls won! Incredible!

The results of the golf tournament are as follows:

Here are my photos of our intrepid, philanthropic golfers: