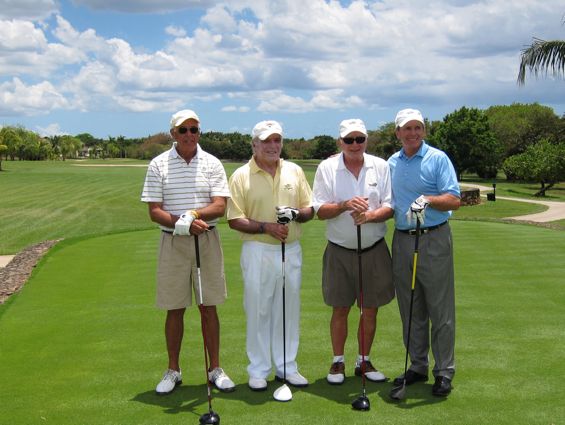 From tomorrow Wednesday March the 28th through to Saturday March 31st, the 27th annual Sugar Golf tournament will be played in Casa de Campo in aid of the Fundación MIR.

The Sugar Golf Tournament is the Fundación MIR’s original fundraising event, from which Lian Fanjul de Azqueta, Founder and President of the charity got the seed money to open the “Casa de Paz”, which has now become the internationally recognized foundation, today called the “Fundación MIR.” Originally just a “normal” golf tournament, “The Sugar” was won in 1990 by Alfy Fanjul (Lian’s brother), who subsequently donated his winnings to Lian, thus transforming the Sugar golf tournament into a charity event for the Fundación MIR, and as such one of the most glamorous, exclusive and important events in the Casa de Campo social calendar. Today, “The Sugar” now incorporates a golf component headed by Alfy, as well as a shooting componant headed by one of Lian’s other brother’s Pepe, which will be played later this year.

From tomorrow, March 28th through to Saturday March 31st, this invitational golf tournament will be played on Casa de Campo’s world famous Pete Dye designed golf courses; the Teeth of the Dog, the Dye Fore and the newly re-opened Links. In the evening the more than 200 partipants and their guests will enjoy cocktails, dinners and drinks, as well as the final prize-giving celebration at various locations throughout the Casa de Campo resort.

This year as always, we will be attending all the cocktails, dinners, some of the golf and the final prize-giving ceremony and will be sharing our photos of all the fun with you here! Coming soon!

Don’t miss the “MIR BAZAAR”
As part of the tournament, the Fundacion MIR is hosting the ‘MIR Bazaar’ at the La Romana Country Club from Thursday through to Sunday with a variety of participants selling a beautiful range of jewelry, fashions and other items.
• Thursday: 12pm-9pm
• Friday: 9am-9pm
• Saturday: 9am-9pm
• Sunday: 9am-2pm
To find out more click here!