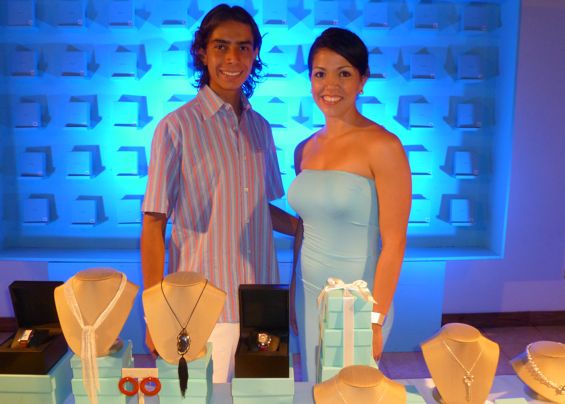 This year’s Fundacion MIR Family Weekend For Life event was spectacular, with hundreds of Casa de Campo’s most beautifully dressed, connected and generous community members coming together to celebrate and give to the Fundacion MIR, an organisation which works hard to supply the Dominican Republic’s most marginalized people with a variety of life-altering services.

The event bagan early on Saturday the 14th of August with the tennis and golf tournaments, played at Casa de Campo’s La Terraza tennis club and the La Romana Country Club. For most however, the main event was the ‘Dancing For Life’ dinner, dance and award giving ceremony which took place at Casa de Campo’s beautiful Minitas Beach.

Guests began to arrive in their ‘tropic chic’ evening wear, from 8PM and were met with a Ron Atlantico cocktail reception in the bar area of the Beach Club by Le Cirque restaurant. With a live music quartet playing, delicious Ron Atlantico Mojitos and Ron Punches it was the perfect way to start a fantastic evening and a great opportunity for guests to mingle and for ladies to admire one another’s dresses!

MIR FACT: Just $500 supplies a classroom for an entire year with notebooks, pens and pencils

Guests enjoy a Cubre Libre at the Ron Atlantico bar

Always a big supporter of the Fundacion MIR, Tiffany & Co. generously hosted their impressive “Wall of Blue Boxes” in which supporters can purchase a Mystery Blue Box from the wall. Each box potentially holds a prize of equal, lesser or substantially greater than the $300 purchase price, which also happens to be tax deductible.

MIR FACT: The Fundacion MIR currently has about 1,000 children at their schools.

Following dinner, the music and dancing began and the Faux-Casino by the Casino Diamante Dominicus Bayahibe was opened. The music was fantastic and the dance floor very quickly filled up with guests enjoying the merengue with their partner or friends! Others (men mostly) made a bee-line for the Faux-Casino, where chips were bought (with proceeds for the Fundacion MIR of course) and prizes were won at the Poker, Black Jack and Chemin de Fer tables. (Note: prizes, not money were awarded, there was no real gambling at the Faux-Casino.)

Congratulations and thanks to everyone who participated in this fabulous event and made it such a wonderful success!

MIR FACT: $1,000 can provide 1 child with tuition, books, transport and uniform for an entire year.

Photos of the After Party with DJ Gringo are coming soon, as well as the official photos from the Fundacion MIR and Ron Atlantico!

The Fundacion MIR Family Weekend For Life: The Golf Tournament