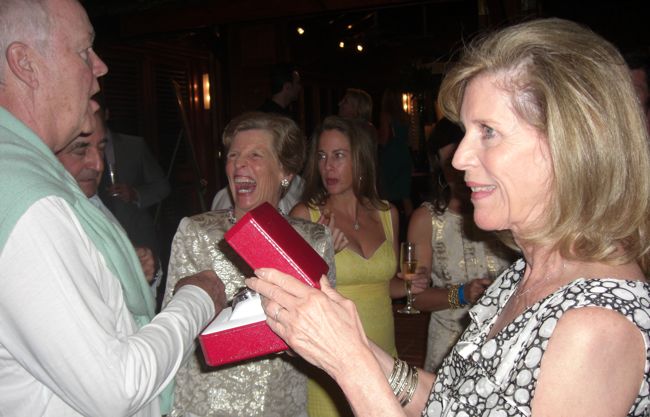 During the Casa de Campo “Holiday Season” otherwise known as the “La Temporada”, from December 26th through to January 1st, the Casa de Campo elite community and their VIP guests enjoy a whirlwind of parties, cocktails, dinners and events, the highlight of which is undoubtedly the “Cartier Benefit” celebrated every year on the 29th of December in aid of local La Romana charities; the Fundación MIR and the Hogar del Niño.

This year the Fanjul Family, who are one of the primary owners of the Casa de Campo resort, along with luxury jewelry brand, Cartier marked their 20th year of collaboration with the Cartier Benefit, an event which has to date, raised over 2 million dollars for both charities; the Fundación MIR and the Hogar del Niño.

As protagonist of the Cartier Benefit event, Emilia Fanjul, one of the founding members of the Fundación MIR (pictured above) plays not only the role of the elegant hostess, accompanied of course by her husband Pepe Fanjul, but is also one of the primary organizers, spending months prior to the event securing items to be included in the silent and live auctions – both of which raise a considerable amount of funds.

This year, the 20th annual Cartier Benefit was once again hosted at the Fanjul’s Casa de Campo oceanside estate, Casa Grande; a sprawling traditional wooden home set in tropical gardens with a private beach. Although numerous private dinners, cocktails and events are hosted at Casa Grande throughout the year, the “Cartier Benefit” is the only occasion that does not require an invite and so for many members of the Casa de Campo community, is a rare opportunity to see and be seen at one of Casa de Campo’s most impressive dwellings.

Greeted with Dom Perignon champagne, the event’s guests began their evening perusing and placing bids on the more than 60 items in the silent auction, which included paintings, homeware items such as lamps and vases, clothing and accessories such as a pin-tucked slip dress donated by New York based designer Alexandra Vidal, who was recently featured in CasaLife Magazine, jewelry and cigars donated by the Tabacalera de Garcia cigar factory in La Romana.

Cartier watches were auctioned by Pepe Fanjul at Casa Grande

The live auction took place on the outside terrace overlooking the ocean, with auctioneer Pepe Fanjul, helped by his wife Emilia Fanjul, who took over the role as assistant, showcasing items to the on-looking crowd.

Following the thrill of the live auction, dinner guests (USD$300 per person) took their seats for delicious buffet catered by the Beach Club by Le Cirque, whilst guests of the cocktail (tickets USD$100 per person) made their merry way home or off to other parties in Casa de Campo.

Despite a rainy downpour at the end of the night, which put an abrupt end to the dancing, the 20th annual Cartier Benefit was a great success, with more supporters taking part than ever before and with an estimated USD$200,000 raised (exact numbers have not yet been released) to be divided equally between the 2 charities the Fundación MIR and the Hogar del Niño – so that they may continue providing education and care for the children of the greater La Romana area in the Dominican Republic.