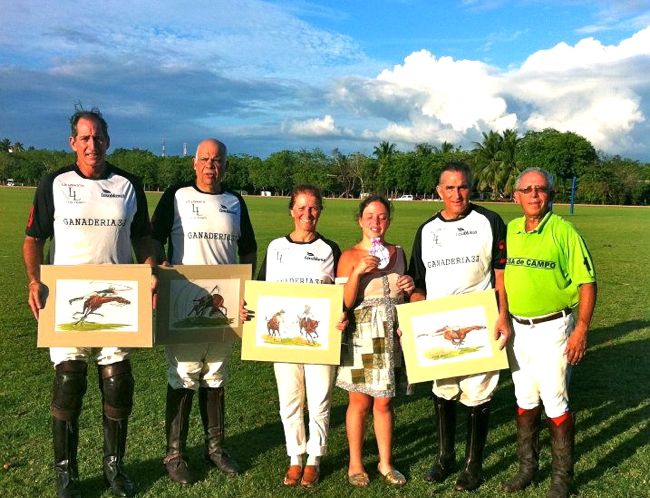 The 2012 edition of the “Masters Cup” polo tournament in Casa de Campo was battled out between 2 teams; Casa de Campo and Sierra Prieta on Sunday the 29th and Monday the 30th of April, when the players, all aged 50 or more, proved themselves to still have what it takes to command the power of a polo pony and thunder up, down and around the polo field in pursuit of a ball – not a feat to be taken lightly!

On Sunday April the 26th the first of the two scheduled matches took place and against all odds – both matches ended a tie.

“A hard fought match that was started off with a great goal by visiting Michigan native and Casa de Campo Villa Owner Tania Evans. Both teams had several chances to win the match but it was not meant to be. The winner of the 4:00pm match tomorrow will be the 2012 Masters Cup Champion.”

And so the following day (Monday April 3oth) the Masters Cup Final was battled out on the Casa de Campo polo fields, with a dedicated and passionate group of polo aficionados in attendance.

“No one would believe any of the players were over 50. The seven men and one great lady battled for six intense and very emotional chukkers. The blood lust was up and tempers were flaring. The “La Lopera” polo team captained by Dr. Jose Lopez won on MVP William Reid’s sixth goal of the match with just ten seconds left in regulation time.

After the trophy presentation the players started to unwind with the help of some much needed alcoholic beverages and in the end everyone had a fantastic time. It was great to see all the players’ families and friends congregate under General Guarien Cabrera’s famous avocado tree, whilst watching the incredible sunset and enjoying each others company. After all this is what it is all about….”

It’s been a long, exciting and successful polo season in Casa de Campo, click on the links below for more photos and articles on all of this season’s polo events:

• Champagne all round at the 7th annual Semana Santa Polo Tournament

• A thrilling victory for “La Potranca” at the Hogar del Niño Polo Tournament!