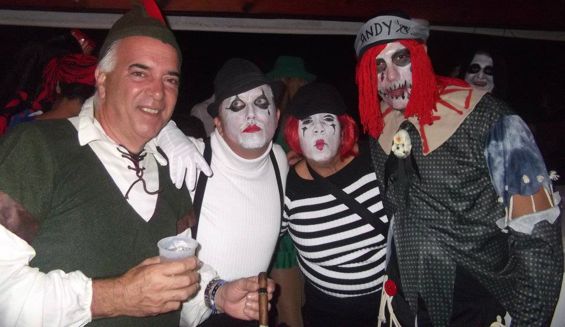 This year, the Casa de Campo Halloween Party 2011, was, according to party planner extraordinaire, Patricia Proaño “the best ever” – and here we bring you the photos to prove it!

Undoubtedly, one of the Casa de Campo community’s favorite parties, the Halloween Party 2011 was held at Casa de Campo villa, Ingenio #10, which had been reinvented as haunted house – complete with a cemetery in the garden, a devilish dance floor and a terrifying terrace and bar!

Patricia Proaño, Amelia Pereya, Ivonna Sosa, Tato Caceres and Gricelle Lahoz, the organizers of the party did a fantastic job of making the event a huge success – well done guys, we’re already excited about next year!

As always, the highlight of the event was the costume contest and this year, with so many excellent, imaginative and unusual costumes the judges really had a big challenge on their hands choosing the winners!

The Funniest: Pitiri Herrera, who was dressed as a clown and won a dinner at Dom Ham burger joint in La Romana

The Spookiest: Thais Winkelhorst, who won dinner at the newly opened Italian restaurant, Mistral in the Marina Casa de Campo

The Most Original: Erika Vilain, who first dressed as an Egyptian temptress followed by a girl from the swinging sixties and won a Facial Treatment at the Cygalle Healing Spa

The Best Couple (1): Enrique and Moraima Montilla who won a spa treatment at the Cygalle Healing Spa in Casa de Campo

The Best Couple (2): Karin Becker and Saul Jenkins, dressed as mimes, who won a sinner for 2 at Papa Jacks restaurant and bar in Altos de Chavón

The Best Couple (3): Danilo y Fefi Salvatierra, who were dressed as male and female wrestlers and won a dinner at Chinois in the Marina Casa de Campo

The following photos of the spooktastic party in Casa de Campo were contributed by Patricia Proaño:

Whilst these photos were taken by Casa de Campo villa owner Amelia Pereya: