Last Saturday the 5th of June, the Buen Samaritano Golf Tournament was played on the Teeth of the Dog Golf Course in Casa de Campo – in glorious sunshine!

The tournament was originally planned to take place on Saturday the 27th of May and was sadly rained off and rescheduled for June the 5th, but following endless days of rain last week – we were all afraid that the tournament would have to be postponed again…….but instead of rain the 46 players of the charity golf tournament were rewarded with a beautiful sunny day!

The tournament started at 1pm, when Emilio Hasbún of Banco Federal inaugurated the tournament with the first putt accompanied by the Buen Samaritano’s medical and administrative team.

Following the tournament the Buen Samaritano’s team and the golf players reunited at the Club Caza y Pesca in La Romana for the prize-giving ceremony and party, where the tournaments winners were awarded their prizes!

The results of the tournament were: 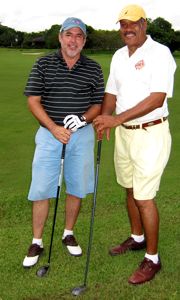 Closest to the pin: Federico Báez on hole #16

Closest to the pin: Marcos Troncoso on hole #5

The money raised during this tournament will go towards the heart surgery of 4 children being treated at the Buen Samaritano Hospital in la Romana.