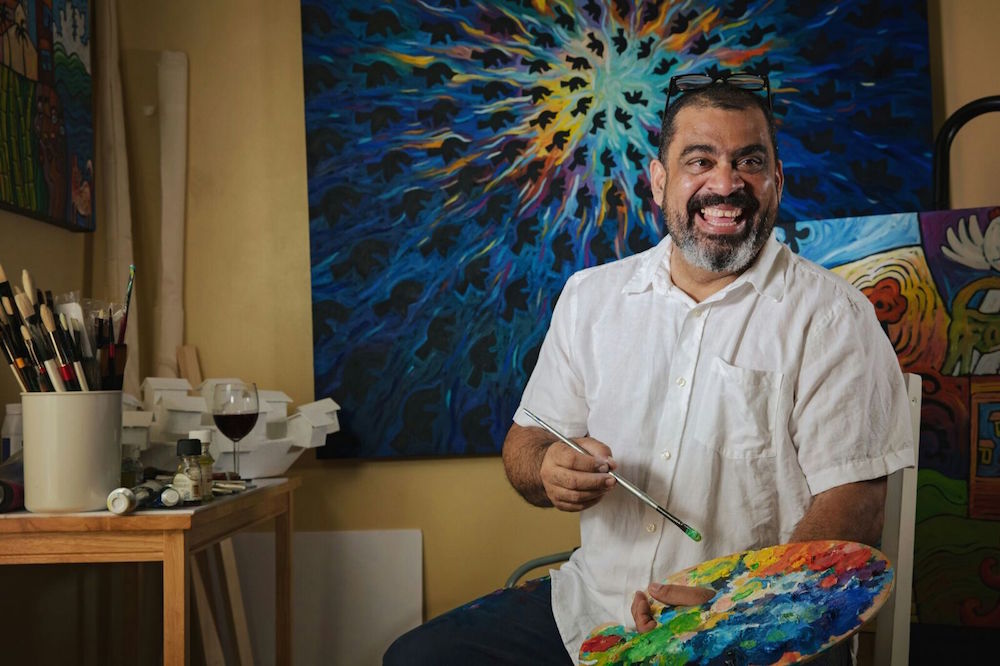 The Altos de Chavón Gallery will present from January 17 the exhibition of the visual artist from Barahona Fernándo Tamburini, known for his colorful abstract work in which he captures the great culture of the Dominican people. His works have been compared to those of the French painter Marc Chagall for his lyrical portrait of peasant life and his magical-realism and fantasy themes that delight the viewer.

“Recent Works” is the name of his exhibition which will include recognized images, bright colors, painting as entertainment, without taking into account serious stories or socio-political events, with a drawing as taken from a cartoon, almost naive cartoon. In addition, forcing many times the composition or topographic surface, as if seeking to annihilate sobriety. “My work has been influenced by other artists such as Stella, Rivers, Murray and the carnival artisans of the country, sometimes approaching Pastiche, but never to parody,” said the artist.

“I have called Tamburini the Dominican Chagall for his collection of animals that defy gravity, floating and falling in the skies over the huts. These images are still there, but its colors are reminiscent of Frank Stella, and the crazy quilt-like compositions may have been inspired by Larry Rivers (who was an RA when Fernando was a student at Altos de Chavón). But whatever or whom ever is Tamburini’s muse, an Aladdin’s lamp has let out this genius of colorful and mischievous artist. His work seems more jovial, freer and more intriguing than ever. He has clearly enjoyed producing his new pieces as much as we are captivated to see them and follow the progress of this wonderful boy from Barahona, graduated from Chavón, successful textile designer in New York and artist based on La Romana, who cannot help but capture our admiration,” said Stephen D. Kaplan, Rector of Chavón The School of Design.

This exhibition consists of a total of 13 pieces created by the artist, and will be open from January 17 to February 18, 2020, from Tuesday to Saturday from 8 am to 9 pm and on Sundays and Monday from 8 am to 5 pm.

Fernando Tamburini, born in 1961 in Barahona, Dominican Republic, known for his colorful abstract work in which he captures the great culture of the Dominican people. Tamburini graduated from the Altos de Chavón School of Design.

In 1987 he traveled to New York City where he worked as a fashion and textile designer. Between 1990 and 1994 he exhibited collectively in the main galleries and museums of the United States, such as the Jadite Gallery in Hell’s Kitchen, the Paterson Museum in New Jersey and the Cork Gallery in Lincoln Center. Tamburini would finally return to Altos de Chavón, to work as an art teacher and later as Director of the Altos de Chavón Art Gallery.