This Thursday the 15th through to Sunday the 18th of March the 7th annual McDaniel Teaching Pro’s Tournament will be battled out between the teaching professionals and ball boys of the La Romana Country Club and the La Terraza tennis clubs.

Casa de Campo spectators can look forward to excellent and exciting tennis matches, which will be played at both the La Terraza Tennis Club and the La Romana Country Club (schedule below), between the rising stars of Dominican tennis including Pedro Nolasco currently ranked #4 in the Dominican Republic and one of the 4 man team representing the country in the Davis Cup, to be continued this September in Venezuela.
[To read more about the Davis Cup, click here!]

This tournament is the major fundraiser for the Ball Boy’s Scholarship Foundation and this year for the first time is raising money with a “corporate sponsor” category with Casa de Campo Living and Silgon Inc. as Lead Sponsor (complete list of corporate sponsors below), as well with the donations of  generous Casa de Campo sponsors, who last year donated more than $30,000.

Here is the full schedule for the tournament – everyone is welcome to come along and spectate, so we hope to see you there!

Wednesday, March 14th, 12pm: Sponsors Appreciation Luncheon
This event is by invite only for members of the Casa de Campo community who have given donations to sponsor the tournament. The sponsorship money goes exclusively towards the players prize-money, the Ball Boy’s Scholarship Foundation and to pay for English classes for the ball boys and girls. If you would like to sponsor the tournament, your donation will be very gratefully received, please contact Harry on: [email protected]

Thursday, March 15th, 9am
Round 1 at the La Terraza Tennis Club

Friday, March 16th, 9am
Round 2 at the La Terraza Tennis Club

About the McDaniel Tennis Tournament

The McDaniel Tennis Tournament is played every year between the ball boys and teaching professionals at the La Romana Country Club tennis club and the La Terraza tennis club – both in Casa de Campo. The aim of the event is to raise funds to pay for sponsorship of an increasing number of the Casa de Campo tennis club’s ball boys. In total last year the tournament raised $30,000 from more than 90 generous sponsors within the Casa de Campo community. The money raised is distributed among the winners and participants of the tournament, “the purse” as well as used to pay for the scholarships of the balls boys and English classes for the ball boys and the teaching pros. 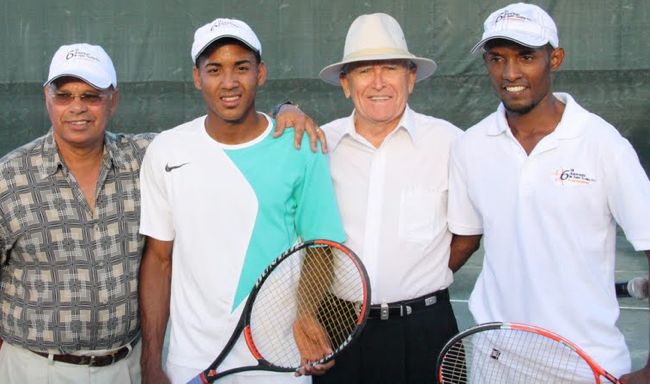 The McDaniel tennis tournament now sponsors the education of of 20 ball boys and 1 honorary ball girl – at a cost of RD$25,000 (about US$700) per child per year. Every year the tournament has been attracting more and more sponsors so that every year they are able to offer sponsorships to 4 more children, we hope that the scheme will continue to grow so that it may help even more children!