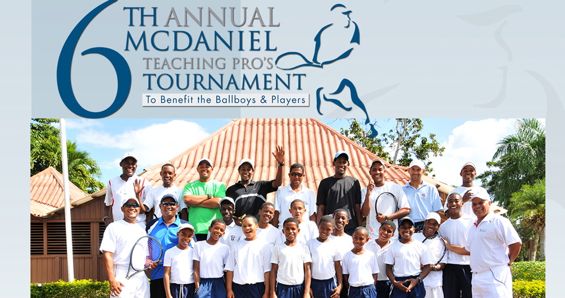 The 6th Annual McDaniel Teaching Pro´s Tennis Tournament is taking place this month from Thursday the 10th of March to Sunday the 13th of March and is being held to give Casa de Campo’s ball boys and teaching pro’s a chance to compete and showcase their talent as well as to win a bit of money, but also to raise money for the Ball Boy’s Scholarship fund.

Not only is this tournament a way for Casa de Campo villa owners and residents to give back to the greater La Romana community, but it is also jolly good tennis – this young players are excellent and so seeing them battle out to win the prize money, makes for some very exciting watching!

Here is the full schedule for the tournament – everyone is welcome to come along and spectate, so we hope to see you there!

Wednesday, March 9th, 12pm: Sponsors Appreciation Luncheon
This event is by invite only for members of the Casa de Campo community who have given donations to sponsor the tournament. The sponsorship money goes exclusively towards the players prize-money, the Ball Boy’s Scholarship Foundation and to pay for English classes for the ball boys and girls. If you would like to sponsor the tournament, your donation will be very gratefully received, contact us on: [email protected]

Thursday, March 10th, 9am: Tournament Round 1 at the La Terraza Tennis Club

Friday, March 11th, 9am: Tournament Round 2 at the La Terraza Tennis Club

About the McDaniel Tennis Tournament

The McDaniel Tennis Tournament is played every year between the ball boys and teaching pros at the La Romana Country Club tennis club and the La Terraza tennis club – both in Casa de Campo, the aim of the event is to raise funds to pay for sponsorship of an increasing number of the Casa de Campo tennis club’s ball boys. In total last year the tournament raised 1.2 million pesos from 67 generous sponsors – which was distributed among the winners and participants of the tournament, used to pay for the scholarships of the balls boys and English classes for the ball boys and the teaching pros.

The McDaniel tennis tournament now sponsors a total of 16 ball boys and 1 honorary ball girl – at a cost of RD$25,000 per child per year. Every year the tournament has been attracting more and more sponsors so that every year they are able to offer sponsorships to 4 more children, we hope that the scheme will continue to grow so that it may help even more children!