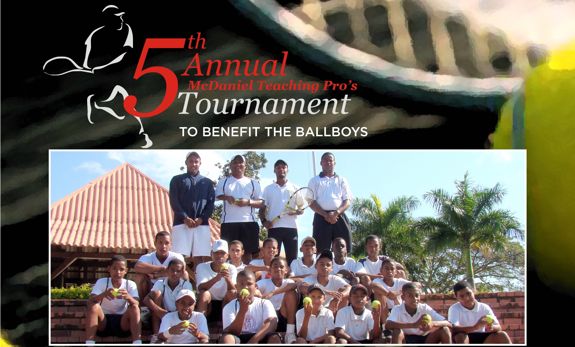 This Thursday the 11th of March is the opening day for the 5th annual McDaniel Teaching Pro’s tournament, a tennis tournament held in benefit of Casa de Campo’s ball boys.

The first tennis matches will begin at 9am on Thursday March the 11th at the La Terraza Tennis Club, the tournament matches will then be played out on Thursday, Friday and Saturday and the grand final will be held at 4pm on Sunday the 4th of March at the La Romana Country Club.

The tournament was started 5 years ago my Rick McDaniel, here Rick tells us a little more about the history of the tournament and his motivation for setting it up:

I have been coming to Casa de Campo since 1981 and have always been active in both tennis and golf. While playing in the annual Caddie’s Golf Tournament in 2005, I noticed that the tennis ball boys as well as the tennis teaching pros were not being recognized in a similar manner.
Therefore, I decided to organize and sponsor a tournament in honor of these fine young men.

Our first tournament was held in 2006 and was a very simple limited affair with only myself and the LRCC as sponsors.

Since that time we have grown to the point that last year we had 43 sponsors who contributed a total of $900,000 pesos. All of the proceeds go toward prize money for the players and four full scholarships each year for the ball boys.

It is not to late to give a donation and sponsor the tournament! Sponsorship donations are from USD$150 to USD$5000, if you would like to make a donation, or would like more information, please email me, Rebecca Hughes on: [email protected]