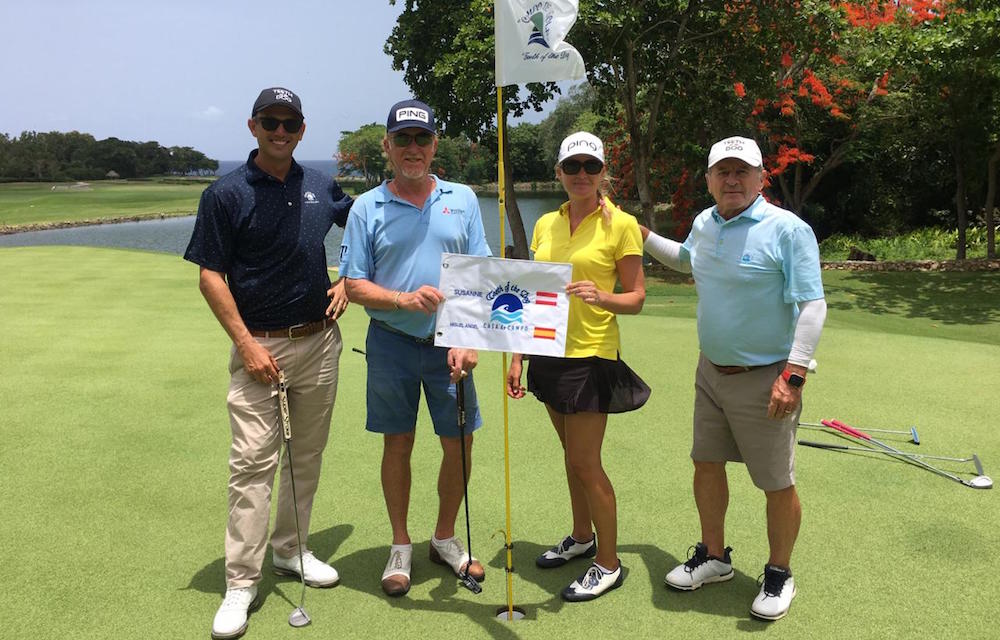 After being closed due to the COVID-19 pandemic, the number one golf course in the Dominican Republic shone again on the shores of the Caribbean Sea. Teeth of the Dog, the gem of Pete Dye at Casa de Campo, reopened its doors in the best way with Miguel Ángel Jiménez “El Mecánico”, multiple champion of the European Tour and PGA TOUR, playing a round of golf. The Spaniard, an honorary member of Casa de Campo, made nine birdies in a round he shared with his wife Susanne Styblo, Robert Birtel (CDC Professional Golf), and Gilles Gagnon (Director Emeritus of Golf at CDC).

Teeth of the Dog is a work of art, a Pete Dye masterpiece. It is a very demanding field, and it calls for you to locate the starting shot in an optimal place. The greens are not very big, they have undulations that force you to hit accurate shots. In short, Teeth of the Dog prompts you to do your best with every hit in order to make a good score,” explained El Mecánico, after finishing his round whilst talking with Manuel Relancio, Head Pro of Casa de Campo, who also presented Jiménez and his wife with a distinction on behalf of the resort.

It has been several months since Jiménez chose Casa de Campo to spend his free time when his commitments in professional golf allow it. “I love the warmth of the people, plus there are very good golf courses. I am competing in the PGA TOUR Champions in the United States and in my weeks off I come here to train because I don’t like the lifestyle there, I prefer the Latin style that the Dominican Republic has,” said the Andalusian, who holds 21 titles in the European Tour and 7 on the PGA TOUR Champions.

There are countless awards and distinctions that Teeth of the Dog receives annually. The last recognition came from the prestigious ranking prepared by Golf Digest, which placed Dye’s design in 1st place amongst the golf courses in Latin America and the Caribbean and 32nd in the world, outside the United States. A few weeks ago, Golf.com ranked Teeth of the Dog 59th among all golf courses on the planet.

Already immersed in the “new normal” by the global context, Teeth of the Dog will host the first of the great golf events for post-pandemic amateurs: the sixth edition of the Latin America Pro-Am to be held from August 11 to 15 with the participation of professionals and amateurs of the region. The champion team led by the Venezuelan Pro Rafael Guerrero Lauría has already confirmed its participation in this tournament that is part of the renewed Casa de Campo golf calendar.

For the peace of mind of each visitor, Casa de Campo has made significant investments to prevent COVID-19 infections and implemented the “Casa Cares” program. The new protocol consists of specific wellness and health safety regulations that include procedures to ensure that each corner of the resort is maintained with the highest standards of hygiene and precaution through the use of new disinfection methods and advanced technology in all areas.