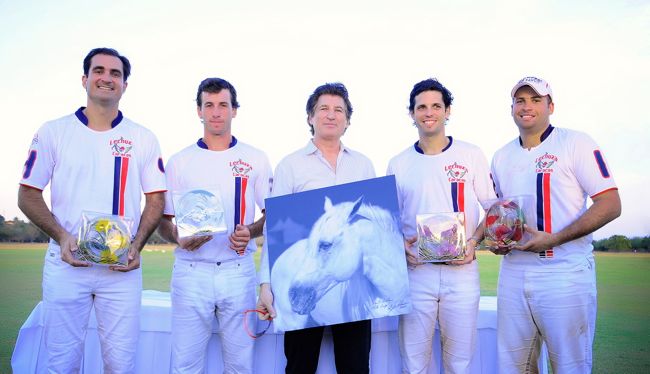 On Saturday the 2nd of March, the Emilio Robba Polo Tournament came to an exhilerating close as the finals were played between the teams “Casa de Campo and “El Güero” at the Casa de Campo polo fields.

This, the 1st annual Emilio Robba Polo Tournament, was played from the 21st of February through to March 2nd at the Casa de Campo polo fields and brought together some of the country’s most talented polo players.

In attendance to watch the finals was Emilio Robba himself, the internationally famous “sculptor of flowers”, who has a store in Altos de Chavón, as well as Claudio Silvestri President and CEO of Casa de Campo, José Lopez the Health Vice President of Central Romana and Director of the new Centro Médico, and Calixto Garcia-Velez Casa de Campo Director of Polo.

Following an exhibition game with the Emilio Robba team, the finals began at 4:30pm between “Casa de Campo and “El Güero”, a fast-paced and thrilling match, in which Casa de Campo were victorious winning with 8 goles to 5. Following the match both teams received prizes – beautiful glass and flower sculptures designed by Emilio Robba himself, whilst the winning team was awarded a magnificent image of a striking white horse.

Playing for the winning team was Julio López, Alexander Schad and Tomas Giovarini, as well as Alfredo Vargas, who was also honored as Most Valuable Player, whilst playing for “El Güero” was Tony Rivera, Luis Constanzo, Jhonny Álvarez and Dennis Santana.

During the “Semana de Francia” celebration in Casa de Campo and Altos de Chavón, we caught up with Emilio Robba, the “sculptor of flowers” for an interview and learnt about some surprising and very interesting projects he has planned for his projects in Altos de Chavón.