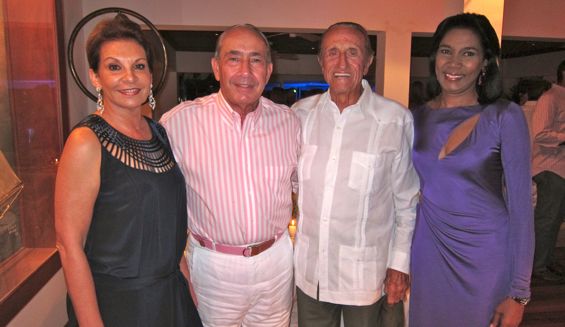 Last Friday the 5th of August, following the Cafe de la Leche gathering at La Casita, I made my way to the Casa de Campo Yacht Club where Italian resident Alex Gandini was celebrating his 31 years living in the Casa de Campo resort in La Romana!

Mr Alex Gandini first came to the Dominican Republic when he was 60 years old, 31 years ago and has been an active and much loved member of the Casa de Campo community (especially the Italian community) ever since – building up a solid network of friends, many of whom joined Mr Gandini to celebrate this special occasion with him at the Casa de Campo Yacht Club in the Marina Casa de Campo.

The evening began with cocktails, enjoyed in the Casa de Campo Yacht Club bar and lounge area, before guests moved out onto the newly refurbished deck where tables had been laid out for dinner.

The dinner was catered by Marina Casa de Campo restaurant, Limoncello and guests were served a typically Italian meal, following which, Mr Gandini was surprised to receive a birthday cake and so the party turned into a double celebration; celebrating 31 years in Casa de Campo and 91 years of life! As the surprise birthday cake (organized by Mr Gandini’s wife) appeared the entire party group started to sing ‘Happy Birthday’ in a mix of English, Spanish and Italian!

Following his birthday surprise, local entertainment company ‘Dos en la Via’ got the party going with live music and singing by Coralis and Mr Gandini, who was clearly in the party mood and kicked off the dancing and wowed his Casa de Campo friends with his merengue moves!