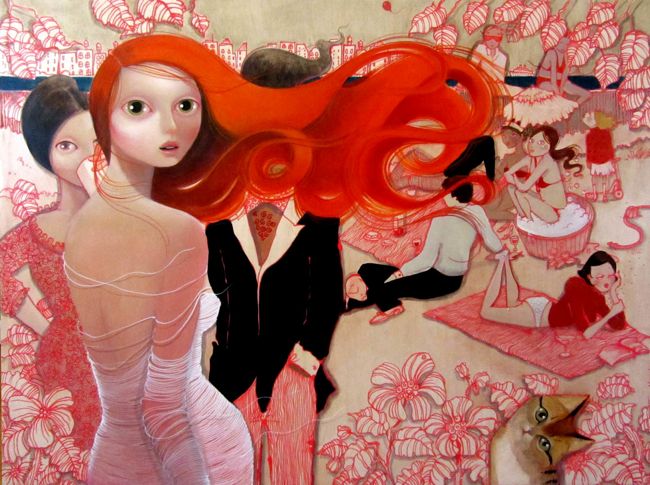 In the pantheon of Altos de Chavón graduates, few have forged careers as varied and exciting as Tania Marmolejo. Willowy, with chestnut-red-brown hair and a quick, wraparound smile that could disarm Iran, Tania studied illustration and fine arts at the Altos de Chavón School of Design in 1998 and earned her four-year university degree at Parsons The New School for Design, in New York, in 2000. She has always been passionately interested in everything, every aspect of art — art for art’s sake, art for profit, and doodles for diversion. Making art is a source of satisfaction for her and has proved to be commercially viable, as well, in almost every combination and permutation.

Tania’s mother is Swedish, and Tania has studied in Norway and spent many a summer holiday in Scandinavia before coming to Altos de Chavón. Imagine the context she grew up in: an international amalgam of Scandinavia and the Caribbean (her father was an engineer at Falconbridge Dominicana C. por A., in the Cibao). Her friends are a mix of every background. The creative sparks of her hybrid vigor fly.

Tania’s fine-art painting often deals with disquieting subject matter. This is Andrew Wyeth’s Cristina’s World colliding with Walter Keane’s wide-eyed gamins of the 1950’s. But the setting and sensibility are of this millennium, full of ambiguity. Almost kitschy young women are both victims and provocateurs. Waifs burst with innocence, sexuality, and nonspecific invitations. Nymphets are strewn around otherworldly landscapes, eyes glued engagingly on the viewer. Their sensuality is pure manga; they are slick Japanese comic-book cartoons to titillate grown-ups, pure eye candy. An unnamed, imagined menace and simultaneous vulnerably inhabit these works, with shattering results. Read what the critics have to say:

“Beware of strangers of the persuasive kind.

… Tania Marmolejo’s work mixes those rare qualities of beauty and mystery, modernity and timelessness, and exceeds this vanguard breeze with a very contemporary approach. Her vibrant palette of red, ocher, and gold has the warmth of the sun after a snowstorm, and has the intensity of Egon Schiele passed through a filter of Manga. This is not a simple sum of influences, but a new visual otherness.

… Indeed, innocence and seduction — or the seduction of innocence — are pillars of her work; the intensive energy of her paintings owing to the tension between those pseudo opposites.”

“There is something oddly familiar yet distinctly unsettling about Tania Marmolejo’s enigmatic works.

The peculiar viewing angle and close-up cropping of her figures evokes both the claustrophobic ways in which young girls are often corseted by their parents and their consequent anxiety and emotional unease upon coming of age.

… With their innocent features and inscrutable expressions, Marmolejo’s quixotic creatures can convey complex emotions ranging from vulnerability to defiance or even regret. For Marmolejo, who adroitly combines technical precision with a vision at once beautiful and disquieting, it’s the viewer who becomes implicated as a voyeur of her dreamy narratives while witnessing the subtle struggles implicit in her works.”

A commercial artist with flexibility and humility

In Tania Marmolejo we have that rarest of all commodities in the art and design world: supreme ability and talent and virtually no interceding ego. That’s right: Tania doesn’t do “artiste”; she works at making art, she sells her art to live.

Her sense of humor and personal warmth permeate every illustrative drawing or commercial painting she decides to do. And she sells her product mostly because the people who have used her on a project cannot stop talking about how great her work is—and how easy it is to work with her. She listens, she makes changes, and she has an imagination that just doesn’t stop.

The lesson is obvious for any illustrator, painter, or designer just starting out: a pinch of humility may make the interview go your way. And with an astounding work ethic, Tania is the poster child for the notion that when you’ve got jaw-dropping talent, the commercial world will beat a path to your door.

You cannot imagine how competitive the commercial art market is in New York. That anyone can make a living in the art world is astonishing. The secret: work your tail off, be more flexible than any shape-shifting critter, and never say no to any project, just put your goods out there. Tania herself remarks that she’s a jack-of-all-trades. That versatility is another part of her ticket to success.

A string of successes

Here are some of the credits Tania has earned after graduating from Altos de Chavón and Parsons: In New York she was a character designer for Data Motion Arts, an animation firm whose clients included the Public Broadcasting System (PBS), MTV, and Hyperion/Disney.

In Tania’s own words:

And when asked about her experience at The Altos de Chavón School of Design, Tania had this to say:

“My experience as a student in Altos de Chavón has been the most important influence in my design and artistic experience. At the school I learned more about myself and how much I loved art, than in any other school or work environment. The chance to be surrounded by nature and beauty, while being allowed to completely concentrate on learning and searching for my voice in art, was unique and extraordinary. I carry those teachings and those experiences with me, and usually remind myself of what I was able to achieve in Altos de Chavón, when things get tough in my world today.

Returning last year to Altos de Chavón to share my experiences with the new graduating class is also one of the best experiences of my professional and personal life. The simple joy of returning and reliving my experiences, and being surprised and impressed by the new, very talented students, brings me full circle in my education and gives me a renewed energy. Everything is still possible, and everything can still be done.”

Words don’t do justice to the layered meanings and uncanny skill of Tania Marmolejo’s work. It’s runs the gamut from her intimate phone-pad scribbles to her destabilizing, beautiful gallery painting. Please take the time to visit Tania’s Web site, www.taniamarmolejo.com, and her doodle blog, www.tania-marmolejo.blogspot.com, to see the work of this extraordinary graduate of Altos de Chavón and Parsons. The professionalism, creative energy, and quirky, kinky charm of her work will stay with you the way it has stayed with me.

Whether you are a passionate art aficionado or not, the Art Chavón event is a must-attend occasion. Art Chavón 2014 is not only your chance to give to a good cause – the Altos de Chavón Cultural Center Foundation – but also to invest in the future of Dominican art and design!

About The Altos de Chavón School of Art and Design

The Altos de Chavón Cultural Center Foundation is a U.S. not-for- profit public charity that has a cultural and educational mission here in the Dominican Republic. The school is on a university level and offers an associate degree, with many students continuing on to Parsons School of Design (now called The Parsons New School For Design) in NY. Founded in 1983 to meet the growing commercial demands of the Dominican Republic, the School of Design offers an intensive two-year program leading to the degree of Associate in Applied Science.