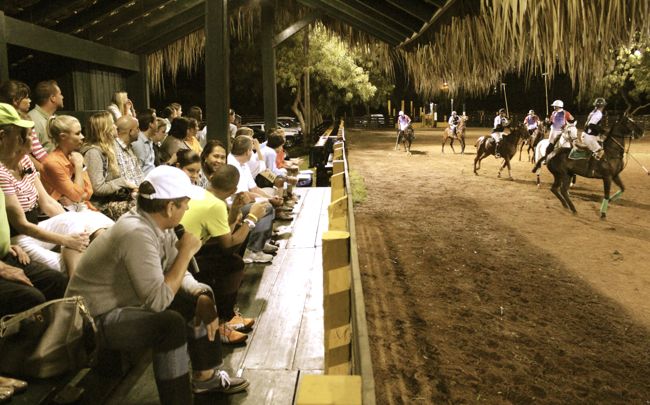 Last Friday February 21st, when “Polo under the Lights” became “Polo in the rain”, it looked like the evening would turn out to be a complete wash out… but as it turns out Polo under the Lights – in the rain – by virtue of a very sturdy indoor seating area, as well as a slip-free surface for the horses, could not only continue as planned, but was quiet literally a stampeding success!

The action was intense, fast and furious and surprisingly felt more authentic and exciting than a polo match played on the fields.

With a much smaller playing area and the spectators stand literally right at the edge – I felt more involved in the game than ever before – with the horses storming past literally within a foot of where we were sitting you couldn’t help but get absorbed in the ferocious action.

Competing in the heated match was team Casa de Campo with Fransico Garrigo, Alfredo Vargas and Cali Garcia-Velez against La Lopera PT Luis Paniagua, Ramon Espinal and Julio Lopez. A tight game from start to finish, just before the final whistle, team La Lopera ended the first Polo Under the Lights as the champions.

And despite having fought it out in literally torrential rain, the players joined the crowd of spectators for a few drinks after the game, when the youngest (and some not so young) got in on the action themselves – on donkeys!

As always, the donkey tournament turned out to be somewhat chaotic, with the naughty donkeys being characteristically uncontrollable (which of course is all part of the fun), but nevertheless goals were successfully scored and everyone had a great time! I personally had a marvellous time… Not only did I manage to score 2 goals but my team also won! Yeehhhaww!

Save the date… The next Polo Under the Lights will be celebrated on Friday March 21st – come rain or shine!

The following collection of photos were taken during the 1st Polo Under the Lights at the Casa de Campo equestrian centre on Friday February 21st 2014: