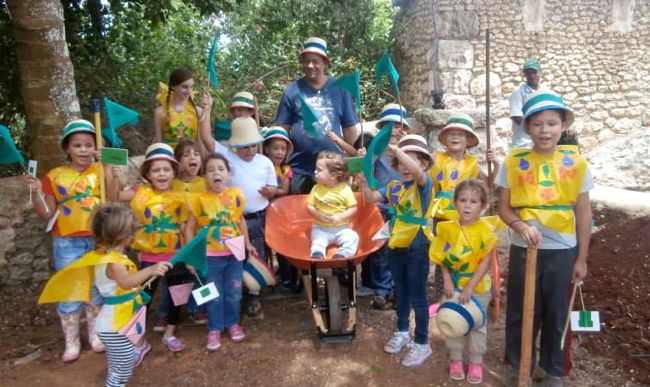 This years theme for the annual Altos de Chavón museum of archaeology summer camp, “Exploring the past”, was full of interesting and fun activities for the children involved in it. These children were immersed into the Taino culture as well as the African slaves that were brought by the Spaniards; the history of our beautiful island La Hispaniola.

From the 7th to the 18th of July, our beautiful children were involved in learning activities that taught them about very important aspects of our homeland (the Dominican Republic) and past cultures.

The children got an insight into the Taino way of life by participating in planting guayiga in a conuco and putting together a scarecrow to protect their crops, decorating their Taino friends (Yaya, Guao and Caonabo) so they will be prepared to dance the areito, as well as making necklaces for themselves. The children saw an example of the Taino burial system and how the Taino community used to build their huts.

The youngest member of the camp

Another important happening the children learned about is the arrival of the African slaves which came to this island forced by the Spanish settlers. The children learned the story of how the Spaniards brought the Africans and saw an image of what the first sugar mill looked like, also they made their very own African masks with cardboard, dried almonds and leaves that they collected from the surroundings.

Ornithologist Kate Wallace teaching the children how to draw birds

The following collection of photos were taken during the Summer Camp Exploring the Past at the Altos de Chavón Regional Museum of Archaeology, from July 7th to July 18th, 2014: