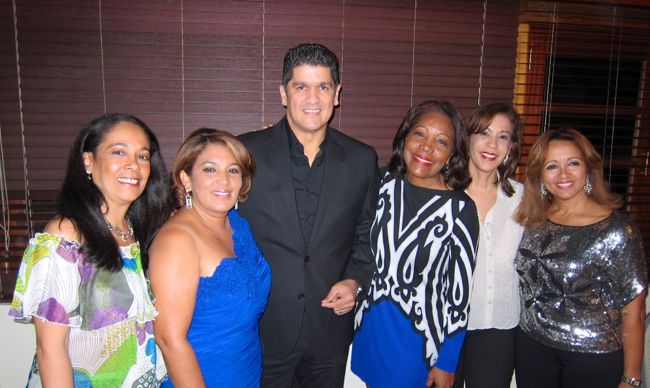 Have you ever had the opportunity to support a cause with Dominican Flavor? Maybe, maybe not? Recently, Casa de Campo, became home base and the perfect setting for a perfect charity gala, a fascinating show by the popular merenguero and dominican balladeer, Eddy Herrera!

Welcoming hundreds of generous guests and visitors from Casa de Campo and La Romana community, the Casa de Campo Flamboyan Conference Center, was eagerly awaiting the “merenguero” to bring all of its latin spice and flavor onto the stage from his past and current hits.

The artist, already getting prepared in his dressing room, which was located on the second floor of the conference center, was waiting patiently to begin with the construction to benefit the Rehabilitation Center branch from La Romana. At this time, many of his fans were anxiously
waiting to meet, take pictures and have a chance to mingle for a few minutes with Eddy Herrera.

With the collaboration of SIX musicians on stage, the show opened up to “Te Amo”, going back into time with several of his hits and some of his international and national colleagues such as “Por Amor” by the Master Rafael Solano, “Lo Que No FUE, no será “from José José, and of course the first merengue of the night “ Pégame Tu Vicio “- that gave to the Dominicans a taste of their own flavor and got more women up on their feet dancing while simultaneously taking pictures of the artist on stage.

Eddy Herrera fully recovered after suffering from pneumonia weeks prior to the event, thanked-God for the event becoming a reality, the cause and the crowd present:

“My immediate fear was, can I continue to sing? Will I be able to fulfill all commitments that I have left in November and December? This is the first performance that I am able to attend after I was cleared from my pneumonia. Let’s all give thanks and praise the event and this beautiful cause!”

La liquadora”, one of his hit singles that made him widely popular in the beginning of his career, was a great way to wrap up such a cheerful evening with with the joy of having raised funds to continue construction on the rehabilitation center for the people in great need. Congratulations for your great work!

For the faithful fanatics who are anxiously awaiting the events pictures you can can now enjoy a selection of photos taken during the “Show Eddy Herrera Romántico”, held in the Flamboyán Conference Center in Casa de Campo:

CLICK HERE TO READ OUR INTERVIEW WITH EDDY HERRERA!