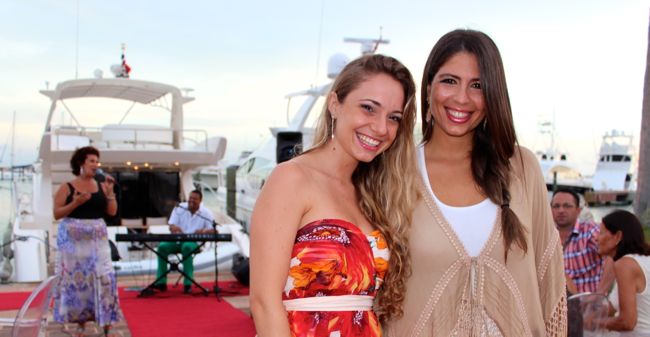 This past Saturday the 27th of July 2013, the Sunset Jazz Night hosted by the Azimut Café in the Marina Casa de Campo, once again proved itself to be one of the Casa de Campo communities most popular social gatherings.

The event, sponsored by Silgon Inc. with Casa de Campo Living and TODO Casa de Campo magazine, attracted more than 100 Casa de Campo villa owners, residents and visitors who spent a wonderful evening listening to soothing jazz rhythms performed by jazz vocalist Maria Postell, who was accompanied by pianist Carlos Marcelo, who in days gone by had been seen performing at the Victory Club (the lighthouse or “el faro”) when it was a piano bar.

The evening began at 6pm, when the Casa de Campo’s most passionate jazz fans arrived to secure their table, and were greeted by a somewhat unusual set-up. With the addition of a red carpet and the musicians “stage” positioned in front of a magnificent backdrop of Azimut-Benetti yachts; an Altantis 42’, an Azimut 50’ and an Azimut 53’, the atmosphere was reminiscent of the French Riviera, with the additional glamor of being staged in the Caribbean’s largest marina. “It was a pleasure to see the guests enjoy this different set-up,” Alice Caslini told casadecampoliving.com.

While most guests arrived a little later, those first to arrive, were able to enjoy perhaps the best of the evening – a beautiful sunset and the clear and beautiful voice of Maria singing classic jazz – popular songs that had many in the audience singing along.

Soon after, many more guests began to arrive, filling up the area and toasting with endless glasses of champagne. With many Casa de Campo villa owners who had been at their homes in Canada, the US and Europe, having just returned to Casa de Campo, the evening served as a great reunion, as friends caught up on their activities of the last few months.

As always, the event’s hosts Alice Caslini Moriconi, Owner and Director of Sales and Marketing at IBI Yachts and her father, Mauro Caslini, President and CEO of IB Nautica, were the perfect hosts.

As the night came to an end, the many guests dispersed to dinner around Casa de Campo, some choosing to stay in the Marina Casa de Campo, while others headed up to Altos de Chavón, to Onno’s Bar and La Cantina.

A wonderful night all round!

We look forward to the next gathering… see you all soon!

The following collection of photos were taken during the Sunset Jazz Night at the Azimut Café in the Marina Casa de Campo on Saturday July 27th, 2013: