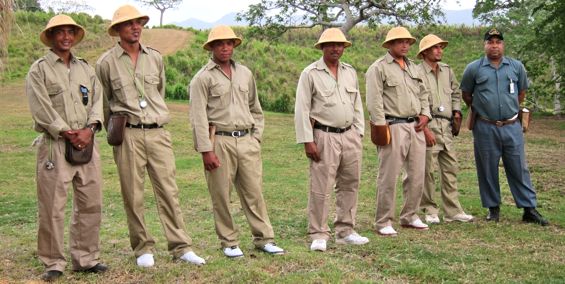 On Wednesday the 27th of April it was raining birds at Rancho Peligro, during the first ‘bird drive’ of the Sugar Shooting Tournament 2011, hosted by Pepe Fanjul.

The Sugar Shooting Tournament took place from Wednesday the 27th through to Saturday the 30th of April, with 2 days of Driven Birds Shooting in the Dominican wilderness at Rancho Religro and 3 days of Sporting Clays Shooting at the Casa de Campo Shooting Center.

The annual tournament began a little late (due to rain) on the Wednesday afternoon at Rancho Peligro, a beautiful wilderness reserve owned by Central Romana less than an hour’s drive outside of Casa de Campo, or mere minutes if you fly in by helicopter as the shooters of the Sugar Tournament did.

The Sugar Shooting Tournament host, Pepe Fanjul with 6 of his guests prepare to go shoot some partridges!

The bird drive took place in 3 different parts, in three different areas of Rancho Peligro and was from beginning to end, very exciting! Having only ever shot at either clays or still targets, I had never experienced the thrill, excitement and exhilaration of a live drive, it was incredible. Of course, I wasn’t taking part in the shooting and was only taking photos from the sideline, but I couldn’t help but get swept away with the thrilling atmosphere.

On each one of the 3 drives, approximately 450 birds were released – the birds were hiding in the undergrowth and were ‘flushed’ out a few at a time, so that there was a constant stream of birds flying overhead, to the front and to the sides of the shooters, and the shooters shot with such impressive skill, that the birds, which seemed like almost impossible targets to me, were literally raining from the sky.

Each ‘shooter’ had 2 shot guns and was accompanied by a ‘loader’ who not only loaded the shot guns, but also counted the number of birds shot by each shooter – a total which was added up to create a final score to determine the overall winner of the tournament.

With nearly 1,000 birds released during the shoot and more than 700 shot and taken home for dinner it was a very successful afternoons shooting!

Here are a selection of my photos:

Photos of the Clay Pigeon Shooting at the Casa de Campo Shooting Center, as well as the results of the Sugar Shooting Tournament coming soon!

The annual Sugar Shooting tournament is part of the Sugar Tournament,  which also incorporates a golf tournament – the Sugar Golf Tournament played from the 13th to the 16th of April on Casa de Campo’s Teeth of the Dog, Dye Fore and Links golf courses. Proceeds from both tournaments are donated to the Fundacion MIR.