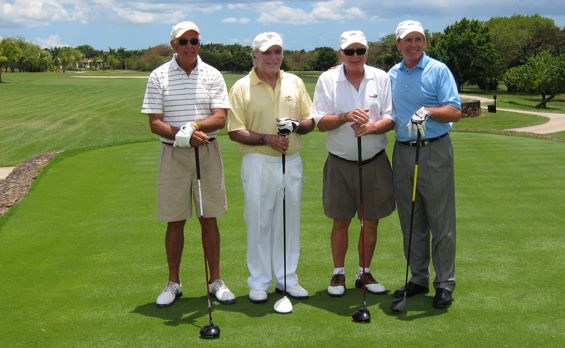 Last Friday and Saturday the 15th and 16th of April the 26th annual Sugar Open Golf Tournament hosted by Alfy Fanjul was played on Casa de Campo’s Teeth of the Dog, the Dye Fore, the Links and the La Romana Country Club.

The prestigious tournament, which actually incorporates 4 evenings of entertainment as well as 3 days of golf was officially inaugurated on Wednesday the 13th of April with a wonderful champagne cocktail at the Casa de Campo Yacht Club, hosted by local Marina Casa de Campo business I.B.I.
Click here to see photos and read about the opening cocktail

Following the opening, the tournaments more than 200 golfers played practice rounds on Casa de Campo’s various Pete Dye designed courses, before the tournament began in ernest on the Friday. Playing in teams of 2 players, the golfers took part in the 2-day 36 hole contest, in the format ‘Better Ball of partners’, with the men competing on the Teeth of the Dog and Dye Fore, whilst the lady golfers played on the Links and the La Romana Country Club courses.

After the friday’s golfing, the players and their partners were invited by Monica and Rolando Gonzalez-Bunster to their Casa de Campo villa to enjoy a delicious BBQ.
Click here to read about and see our photos of the gathering at the Gonzalez-Bunsters.

Golfing on the Teeth of the Dog

Golfers began teeing off from 8.30am on Saturday and as rainy weather during the Sugar Open has become somewhat of a tradition we were all fearful of bad weather, but despite some dark clouds looming in the distance, the weather was glorious.

At the end of a great day of golf, the final winners, champions and runners up were decided, and here are all the results:

Hole in One!
Congratulations to both Juan Pablo Campos and Fernando Canto for Holes-in-One on hole #12 on Dye Fore!

Hole in One!
Congratulations to Tracy Boyle for a Hole-in-One at the La Romana Country Club during her practice round on Thursday!

It was a fantastic tournament – the end of which was celebrated later on that night with a dinner, prize giving and dance at the La Romana Country Club. Photos of that coming soon!

Meanwhile, here are my photos of the golf:

Caught in the act! Here are a few candid camera shots of our Sugar Golfers playing golf!

Posing for our cameras:

The Fundacion MIR
The Sugar Open Golf Tournament is held every year in aid of the Fundacion MIR, a non-profit organization which works to provide eduction and health services to the children and people of La Romana, who are most in need. They run 3 schools; the MIR Esperanza (boys vocational school), the Escuela Tecnica Vocacional Fundacion MIR (girls vocational school) and thePrimaria MIR (infants school), they also run a health clinic, calledthe Clinica de Familia, where the treat and care for people with HIV and AIDs, and where they specialize in preventing babies born to HIV-positive mothers contracting the disease.  To read a little about the history of the tournament, click here.

For more information on the Fundacion MIR and to make a donation, visit their website: www.mirinternational.org