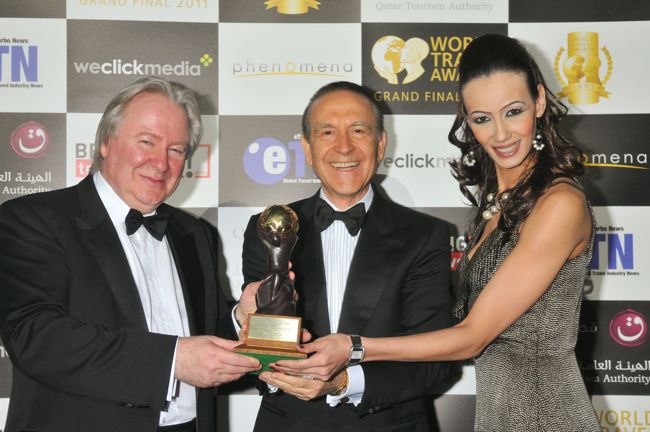 Last night (Wednesday the 11th of January), during a glamourous black tie gala for the grand final of the Global World Travel Awards 2011, in the exotic location of Qatar, our beloved Casa de Campo resort was once again crowned the “World’s Leading Golf Resort!”

Having already swept the board at the Regional World Travel Awards for the Caribbean and the Americas, taking home the award for “The Dominican Republic’s Leading Resort 2011” as well as 4 other awards, including of course, the “Caribbean’s Leading Golf Resort 2011” (for the 6th time), it is no surprise, but nevertheless a great honor for Casa de Campo to be named the “World’s Leading Golf Resort”, for the 5th consecutive year.

The ceremony took place at the Katara Cultural Village, a majestic arts and exhibitions complex in Doha, Qatar, where the world’s most important decision makers in travel came together to hear who had been named as the very best in travel throughout 2011 and where, Casa de Campo was honored among big travel industry names such as The Ritz-Carlton, Lufthansa, Jumeirah, Mandarin Oriental and Four Seasons.

“This honor is especially awe-inspiring for us as 40 years ago, Pete Dye opened our first golf course – the Teeth of the Dog – with seven holes right on the Caribbean Sea, that consistently ranks as the #1 course in the region” said Silvestri.  “And now 4 decades later,  with three distinctly different golf courses for hotel guests and a private membership course, Casa de Campo on its grounds has a total of 90-holes all designed by Pete Dye, 63 for hotel guests to play. And with over 32,000 golf courses around the globe, for Casa de Campo to be acknowledged as the best resort for golf in the world for the 5th consecutive year.… that’s quite an honor and one we are very proud of.”

Casa de Campo’s Teeth of the Dog golf course, #1 in the Caribbean

Of course, Casa de Campo is much more than just the “World’s Leading Golf Resort.” Casa de Campo also boasts world-class sporting facilities; polo, tennis and shooting, all of which play host to numerous international tournaments each year, private beaches, the Altos de Chavón cultural village, a Mediterranean-style Marina, as well as the Casa de Campo hotel, which has just recently completed a US$40million renovation and has been named as one of the “Leading Hotels of the World.”

The lobby of the newly transformed Casa de Campo hotel

In addition to being a resort, Casa de Campo is also a home. With almost 1,700 private villas, Casa de Campo has a permanent resident population of more than 2,000 and a community of more than 10,000, made up of Casa de Campo villa owners from Santo Domingo, as well as from the United States and all over the world.

Some of Casa de Campo’s most impressive ocean-side villas

• The Casa de Campo resort has 4 Pete Dye designed golf courses; the Teeth of the Dog, the Dye Fore, the Links and the La Romana Country Club, as well as a new 9 hole course called the Dye Fore Lakes, which can be played with either the North or South 9 of the Dye Fore – that’s 90 holes in total!

• The Teeth of the Dog was named as the 47th best golf course in the world (out of 32,000) by Golf Magazine, as well as the Caribbean’s #1 golf course

• Casa de Campo’s inland golf course “The Links”, which opened in 1976 is currently being transformed and remade, under the guidance and instruction of Pete Dye himself. The course closed in May 2011 and is expected to reopen in March 2012

• Pete Dye credits the creation of the Teeth of the Dog to divine intervention, ¨I built eleven holes and God built seven,” says Dye, referring to the seven captivating sea-side holes

• Pete Dye was inducted into the World Golf Hall of Fame in November, 2008 in the Lifetime Achievement category.

The World Travel Awards were launched in 1993 to acknowledge and recognize excellence in the global travel and tourism industry. Now celebrating its 19th anniversary, it is regarded as the very highest achievement that a travel product could hope to receive – hence  “The Oscars of the Travel Industry”

Graham E. Cooke, President & Founder, World Travel Awards, underlined the core strengths of the Grand Final nominees: “During times of economic uncertainty world-class brands come into their own, continuing to grow market share whilst competitors flounder, traits demonstrated by all those travel brands that have made it to our Grand Final in Doha.”