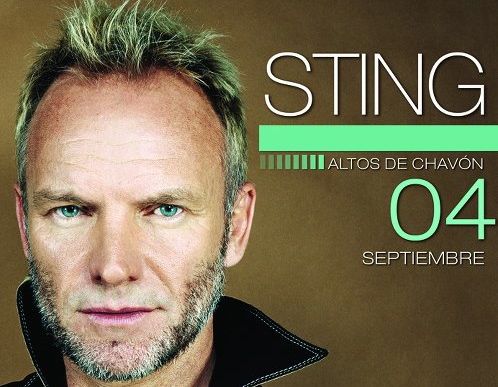 Woohooo!!! It’s finally nearly here – on Sunday the 4th of September, the legendary STING will be here in Casa de Campo rocking out in the Altos de Chavón amphitheater to an anticipated “full house” of 5,000 fans or more! Bring on the party!

For those of you who have been living under a rock and have not yet heard anything about STING in Altos de Chavón, here is a brief summary of the event:

A few concert details to get you even more excited than you already are….

STING’s first performance in the Dominican Republic in 2006 at the Altos de Chavón amphitheater was completely SOLD OUT and is a concert heralded by many as being one of Altos de Chavón’s all time best concerts, when STING rocked out to a crowd of an estimated 6,000 fans and was even accompanied by merengue and salsa legend Juan Luis Guerra.

This year’s performance, scheduled to take place in just over 1 month, looks set to be equally as popular and impressive with concert organizers Evenpro, promising a set to include STING’s most famous and well loved songs; “Every Little Thing She Does Is Magic”,“Roxanne ” and “Every Breath You Take” from the era of ‘The Police’ and ”Englishman in New York”, ”Fields of Gold” and “Desert Rose” from his career as a soloist.

Pre-Sting and Post-Sting Party anyone?
As yet, we have heard no official plans for a STING warm-up or a STING after-parties, but no doubt as the event gets nearer, one or all of Casa de Campo’s party establishments will announce something to extend the party beyond just the concert hours! If I had to guess – I would say the best spot for a warm-up party would be Onno’s Bar or Papa Jacks in Altos de Chavón and I’m almost certain the after-party will take place somewhere in the Marina Casa de Campo….watch this space!!!

See you there!!! Ahhhhhhh sooo excited!!!