A state of emergency has been declared by President Danilo Medina for the northern region of the Dominican Republic as heavy rains have continued to fall over the past two weeks causing wide spread flooding and evacuation. Using data from satellites, specifically studying the Global Precipitation Measurement (GPM), NASA was able to record that 9 inches of rain fell over the course of November 8th – November 15th. This in turn has displaced over 20,000 residents and damaged 4,000 homes. Red alerts remain in Montecristi and Puerto Plata. 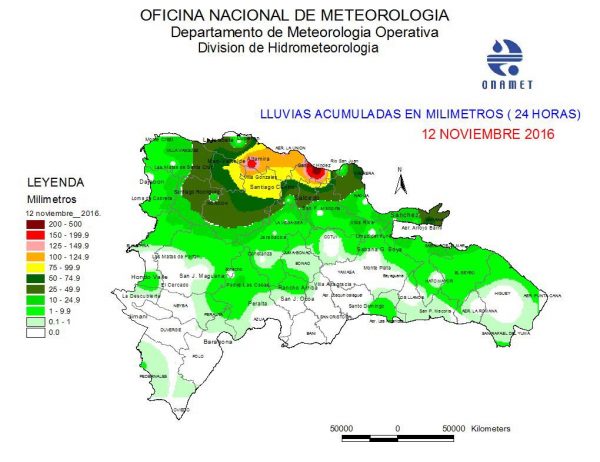 The US National Hurricane Center has stated that heavy rains will remain and move westward across the island, and they continue to keep a watchful eye on a possible tropical cyclone development in the southwestern area of the Dominican Republic. As roads and bridges have been damaged or blocked by floodwater or landslides, many communities have been isolated. Communities on hillsides and along rivers have been warned about flash-flooding, and the military has already rescued people left stranded in Los Naranjos.

The Dominican Republic’s Public Works minister, Gonzalo Castillo has estimated the cost of repairing damages sustained to be around RD$ 5 billion in a press conference at the Emergency Operations Center (COE), and although they are eager to start reconstruction, continued rain prevents it. Stay tuned as we bring you more updates on these weather conditions and how you can help those in need.