Our beloved Casa de Campo resort has already started preparations for the hallowed Casa de Campo “high season” which starts in November, with a strong advertising campaign in Golf Magazine, as well as on various modes of transport in the Miami Dade area of Florida!

The Casa de Campo Resort, the World’s Leading Golf Resort is hoping to attract even more golfing enthusiasts, sun worshippers and families than ever before, to enjoy Casa de Campo’s world-famous Pete Dye designed golf courses; the Teeth of the Dog, Dye Fore and the Links, as well as her excellent sporting facilities and fun kids activities.

Casa de Campo is especially excited about their placement in Golf Magazine, here are the comments of Sarah Davis, who is in charge of media at the magazine:

“Casa de Campo looks great, you’re running opposite our GOLF Magazine Fab Foursome Bracket Challenge announcement in which we culled over 300,000 votes and over 30,000 sweep entries to choose the top “dream foursome” across entertainment, politics, sports, and business. This Bracket Challenge broke company records in terms of entries, responses, PR buzz, and call-ins from participating celebrities. On page 10, Editor David Clarke also asks readers to refer to the page for the results of the Challenge, so it should get a lot of extra exposure for Casa de Campo with your adjacency.” 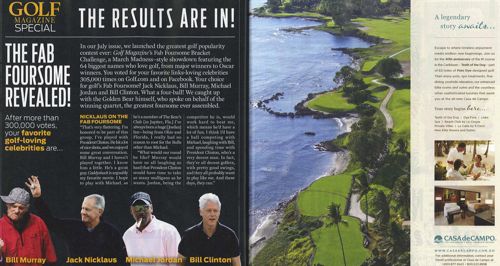 You will notice that the “dream foursome” that was selected includes President Bill Clinton and he is positioned right next to the page where our ad appears. As you know, he is a great enthusiast of Casa de Campo and has played Teeth of the Dog several times. I am sure he will definitely identify it immediately! 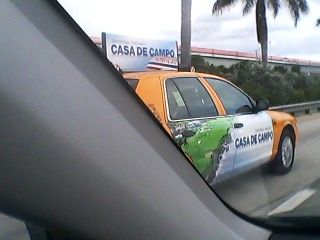 To find out more about the new American Airlines flight between La Romana – Casa de Campo and Miami, click here!

Forget the recession tourists! Casa de Campo is the place to be this winter – it’s always warm here!

This article was written by Rebecca Hughes, editor of Casa de Campo Living