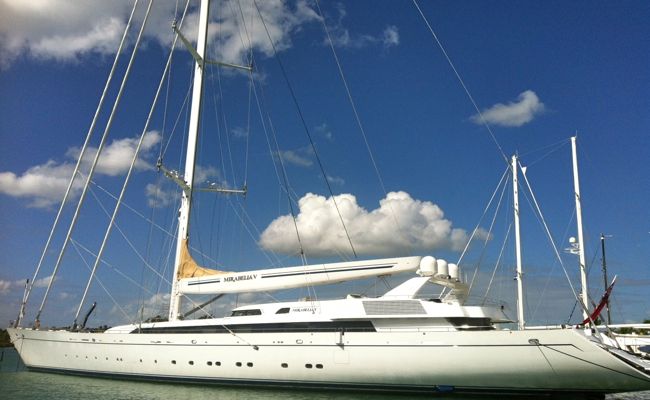 This year the Marina Casa de Campo has played host to some very impressive mega yachts; the 190ft RONIN, as well as the 394ft ‘A’, owned by Andrei Melnichenko and now the “Mirabella V”, the world’s largest single-masted yacht is currently in residence.

The magnificent “Mirabella V” is a sloop-rigged super yacht, which was completed and launched in 2003 for Joseph Vittoria, former chairman and CEO of AVIS rental car company, at a cost of more than US$50 million dollars. At 247ft long, the “Mirabella V” is, we believe, the longest or even the largest yacht to have been docked in the Marina Casa de Campo this year and probably ever – when the 394ft “A” paid the Marina Casa de Campo a visit, it was so large it had to be docked outside in front of the Casa de Campo Villas of the Bahia Chavón area.

The “Mirabella V” was sold in June of this year 2011 to an undisclosed private owner, and is, according to wikipedia.com no longer available for charter, which means that the current owner is very likely to be currently vacationing in Casa de Campo. Although we do not know for sure how long the “Mirabella V” will be staying in Casa de Campo, we have heard rumors that the owner is staying in Casa de Campo for New Years Eve, so she will be docked here until at least the beginning of the New Year – and we hope even longer!
[Update: Having just flown over the Marina Casa de Campo in helicopter with Helitours, we noticed that the Mirabella V was no longer there – maybe she just went out for a sail or maybe she left – sorry we don’t know!]

At 290ft, the “Mirabella V” is twice as tall as Nelson’s Column (in Trafalga Square, London) – so tall in fact that her mast is visible from almost any spot within the Marina Casa de Campo and is clearly visible from the central Plaza Portfino area. If you’d like to take a look at the “Mirabella V” and we recommend you do (even if you’re not interested in boats, you will still be impressed), she is docked at the end of the Paseo del Mar near to the Victory Club – in the same dock as we spotted the RONIN back in June 2011.

A few more interesting facts about the Mirabella V:

• Before she was sold, Joseph Vittoria chartered the Mirabella V for USD$250,000 a week

• The Mirabella V was built as part of a fleet of mega yachts, all named “Mirabella” and owned by Joseph Vittoria

• With a master suite and 6 cabins, the Mirabella V can comfortably host up to 12 guests

• On the Mirabella V’s deck, near to the bow are 2 swimming pools

• bymnews.com/new/mirabellav/index.html – a great article with photos of inside the yacht

Other Mega Yachts spotted in the Marina Casa de Campo are:

• The RONIN, the Ronin is 191.9 feet long, has an outdoor basket ball court, 2 tender boats, 2 jet skis, a garage for a Hummer, outdoor dining area with a hot tub, sleeping space for 10, crew of 13 and a full lounge set. Click here for photos!

• The ‘A’, a 394ft Mega Yacht, owned by Andrei Melnichenko was spotted in the waters outside of Casa de Campo in January of this year.
Click here for photos!

• The Octopus, a 431ft Mega Yacht owned by Paul Allen, who was allegedly here in Casa de Campo with fellow billionaire Bill Gates in July 2009.
Click here to find out more!