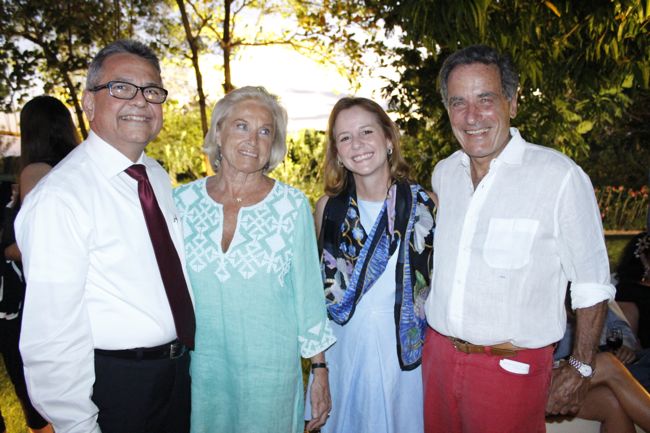 Bravo to Nicolleta and Mario Galleto who recently hosted the 3rd annual Sports and Cultural concert at their Casa de Campo villa in aid of the Hogar del Niño.

The enchanting evening began with a cocktail around the Galleto’s pool in the garden of their beautiful Casa de Campo villa, where with more guests than ever before it was clear from the very beginning that the fundraising evening would be a great success.

While enjoying cocktails, canapés and champagne, the many Casa de Campo guests were invited to peruse a beautiful art exhibit, and select their 3 favorite paintings. Bursting with color, the collection of 27 artworks had been painted by a group of children of the Hogar del Niño, a project overseen by Italian artist Angela Occhipinti who volunteered at the school as an art teacher.

Before the concert began, as host of the evening, Casa de Campo villa owner Mario Galleto took a few moments to say a few words. “The Sports and Cultural project is not yet completed, but it is advancing well,” he said, adding with humor, “we organised this concert, to take some of your money”. Money which he explained will be used to build a roof for the Sports and Cultural pavilion of the Hogar del Niño. “We need you to continue to be friends of the Hogar del Niño, we aim to build the roof by next year, but this doesn’t mean we have to host many concerts – but that we must sell lots of paintings,” he added with yet more humor which is characteristic of Mario.

Xiomarita Matos, president of the Hogar del Niño, the Dominican Republic’s most complete education and daycare facility, also added that “the children are already playing on the court and our girls are champions in volleyball, but we do need the roof, which will allow us to use it for cultural activities, as well as sports.”

And then a little after sunset it was time for the magical concert to begin. The performance by the “Camerata Coral Dominicana”, a choir of more than 30 Dominican musicians, as well as soloists directed by José Enrique Espin S. was fabulous and certainly got every in the mood to give a little more for the cause at the art auction that followed… Which sold out completely and raised enough money to put a roof on the Sports and Cultural pavilion!

And finally congratulations to Idaliza Alexander (age 12), Quennie S. Paniagua (age 15) and Alexis Guerrero (age 21) who were crowned the winners of the art contest, as their paintings were the ones who got the most votes from the guests.