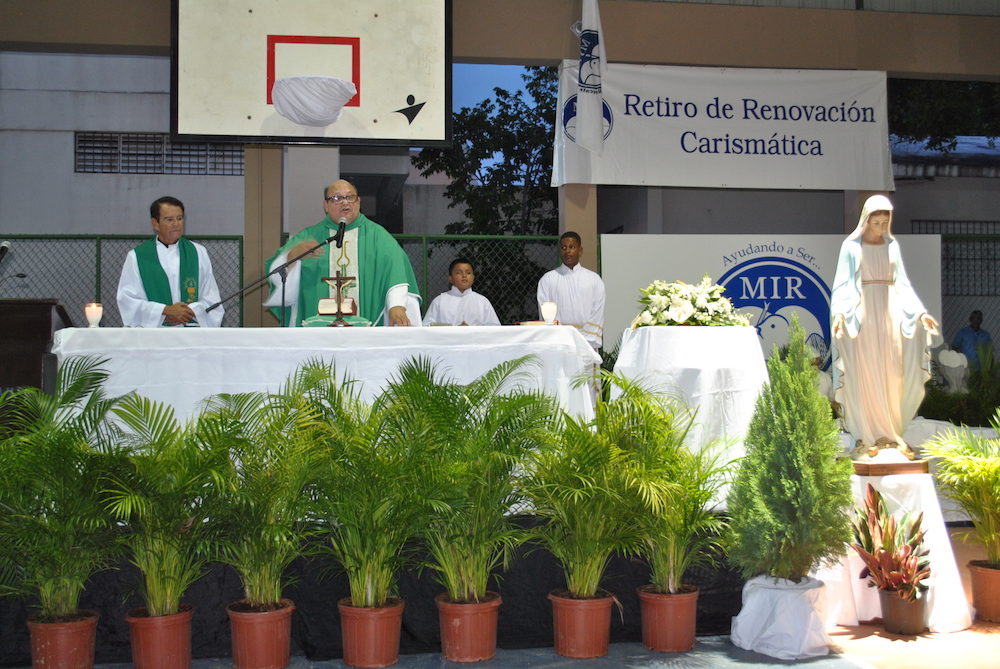 This year, the Fundación MIR celebrated its 27th annual “Retiro Carismático” or “Spiritual Retreat” in a slightly different way. Instead of hosting three days of activities, the retreat was celebrated on Saturday, October 30th at the Politecnico Fundación MIR in La Romana. This didn’t hold back any of the event’s annual supporters and was yet another very successful year.

The retreat has become a tradition here in Casa de Campo and in La Romana. The event was founded from the initiative of Father Emiliano Tardiff, the first one taking place back in 1990 and has been attended by many who embrace religion, celebrate their faith, and look to share with others biblical knowledge. Organized every year by Lian Fanjul de Azqueta and Lyanne Azqueta, President and Founder and Executive Director of the Fundación MIR, the retreat always carries a theme. This year it was “Adelante en Santa Audacia,” which translates to “Moving Forward with Holy Boldness.” The retreat is open to everyone; children, teenagers and adults, and is of course, free!

The 27th Spiritual Retreat, represented a collaboration between the Fundación MIR, the “Hermanas de la Presentación”, the “Comunidad de Siervos de Cristo Vivo”, “Ministerio de Música Caná” and the St. Stanislaus Church in Altos de Chavón, who together welcomed their guests to a simultaneously joyful yet peaceful celebration of worship, with wonderful songs, as well as numerous workshops for both adults and youngsters directed by special guest from Puerto Rico; Father Ramón Albino and Mr. Miguel Calzada. All with the aim of sharing a moment of reflection, to learn and find guidance. In the morning, Mrs. Rosa Portes offered a conference for young people, where more than 300 young people from La Romana received a guide on how to lead a happy based on spirituality without losing their essence.

The day ended with a Eucharistic celebration and mass for the healing of the sick a mass at the multipurpose court of the Politecnico Fundación MIR celebrated by Mons. Ramón E. Albino and members of Siervos de Cristo Vivo. Ms. Lian Fanjul de Azqueta and Mr. Norberto Azqueta gave the words of farewell and also thanked all those who gathered to participate in this tradition that celebrates a journey of 27 years. The next retreat will be held the first Saturday of October 2018.

Below a gallery of pictures taken by Fundacion MIR during the retreat celebrated on Saturday, September 30th, 2017 at the Politecnico Fundación MIR in La Romana: