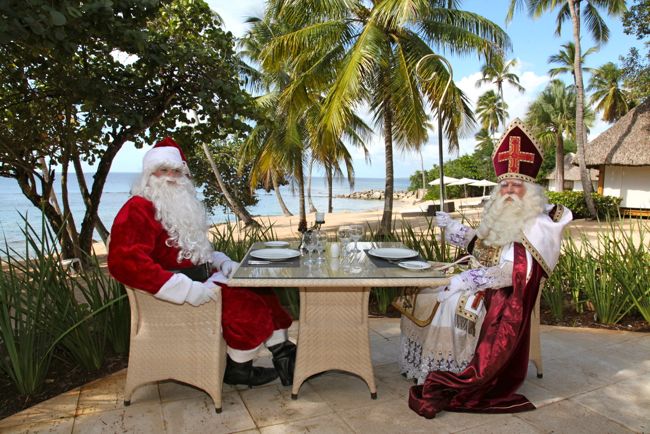 Last Saturday the 10th of December, SinterKlaas, the grandfather of Santa Claus arrived into the Casa de Campo resort, brining with him the “Christmas Book” containing all the names of the naughty and nice children!

Here is the story of SinterKlaas in Casa de Campo:

Travelling from New York, SinterKlaas arrived on Saturday afternoon at 1.31pm with JetBlue.

SinterKlaas, a super VIP is met by Claudio Silvestri

Claudio Silvestri, the president and CEO of Premier Resorts and Hotels greets SinterKlaas as he climbs out of his BMW at the Casa de Campo concierge. In the lobby SinterKlaas posed for numerous photos with; Luca Banfi, head chef at the La Caña and Beach Club by Le Cirque restaurants; Phillip Bucher, Director of Casa de Campo Food and Beverages as well as a group of Casa de Campo children!

SinterKlaas is reunited with his grandson, Santa!

SinterKlaas plays golf on the Teeth of the Dog!

Over cocktails and delicious food, SinterKlaas and Santa spent some quality time together.

Rumor has it that SinterKlaas is still in Casa de Campo, relaxing and having a good time! We hope you enjoy the rest of your stay – be sure to play on Casa de Campo’s other golf courses; the Dye Fore and the Dye Fore lakes, and take a stroll around Altos de Chavón!