The Living Room by Good Vibe opened back in 2017 and it has not stopped adding new things like their new upstairs area and numerous party’s and gatherings – it is no wonder why it has become the new “it” place in Altos de Chavón. The atmosphere is perfect for the art village and unlike anywhere else in Casa de Campo. Last year they hosted Sergio Logioco who performed in La Romana for the first time since it was such a great success he’s coming back on Thursday, April 25th!

The Argentinean singer-songwriter Sergio Logioco will delight the community with his concert “Canta y Cuenta Tango” at the Living Room in Altos de Chavón. The artist will present is a high-quality musical show, which combines in a most splendid way music and singing, while at the same time interacting with the audience; allowing viewers to know, see and feel the culture of tango as a withstanding musical style in the world.

Logioco, with more than 30 years of artistic career and presentations in Latin America, Europe, and the United States, promises a first-class show. This is his first time performing in La Romana but not his first in the country. He has performed in Casa de Teatro in Santo Domingo and Teatro del Cibao in Santiago. His shows not only interpret classic tangos but also delve into the historical description of their creators and the meaning of the native Argentinian words used in those tangos, explaining their idioms.

You can not miss this great show by Sergio Logioco, with his incredible voice and accent, with tango that will go straight to your soul. PLUS, the event will benefit the Hogar del Niño and costs only of RD$500. Mark your calendars for Thursday, April 25th! 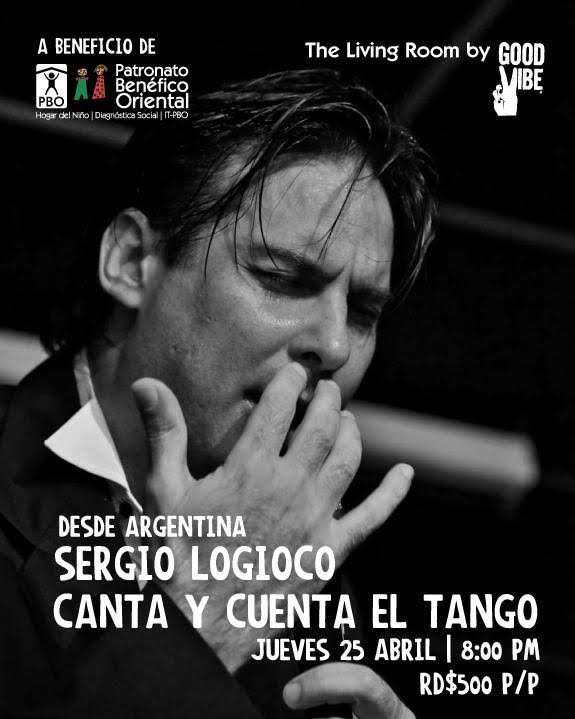