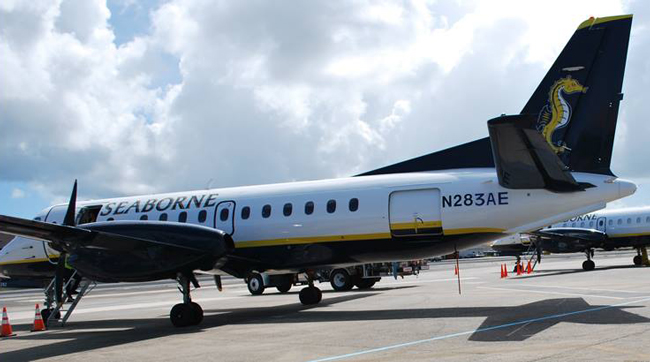 Seaborne Airlines, who started their first flight into the Dominican Republic here in La Romana in December, have just announced their 4th destination within the country.

A non-stop service from Luis Munoz Marin International Airport in San Juan to Las Américas International Airport in Santo Domingo (SDQ) will start April 15, 2014. Santo Domingo will be Seaborne’s fourth destination within the Dominican Republic, the others being La Romana, started in December, 2013; Punta Cana beginning tomorrow, February 14th and Santiago beginning March 15th. All markets are planned to have daily service, currently flights into La Romana – Casa de Campo arrive every Thursday and Sunday, but the daily service is scheduled to start from March 15th.

“San Juan to Santo Domingo provides another access point to the U.S. market and reinforces the importance of Puerto Rico as a connecting point in the Caribbean” said Gary D. Foss, president and chief executive officer of SeaStar Holdings, parent company of Seaborne. “And the teaming local market between Puerto Rico’s capital and that of the Dominican Republic will benefit from the added service offering.”

“As the largest air access hub of the Caribbean, Puerto Rico is committed to providing five-star service to the Caribbean region. We are certain this new Seaborne route between San Juan and Santo Domingo will further stimulate the flow of passengers between Puerto Rico and the Dominican Republic. The addition of yet another flight to our Luis Muñoz Marín airport provides greater access to a broad network of regional and international destinations to travelers while, at the same time, boosting Puerto Rico’s economic growth”.

Seaborne announced earlier that it is relocating its headquarters to San Juan, Puerto Rico in March. With the relocation Seaborne has committed to the creation of 400 jobs and to rebuilding the Caribbean route structure from Puerto Rico that export growth and tourism are so dependent on.

Flights can be reserved at www.SeaborneAirlines.com