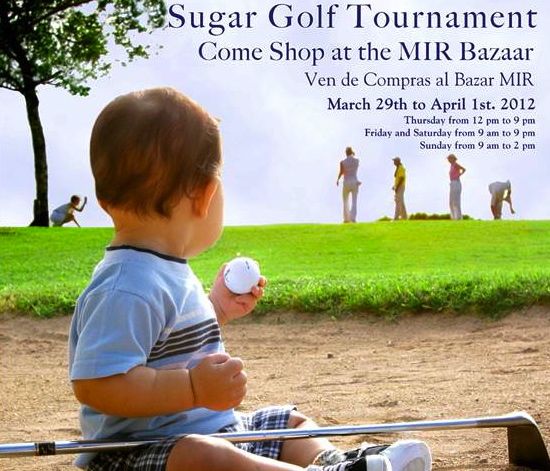 The annual “MIR Bazaar”, held as part of the Sugar Golf Tournament will this year be open at the La Romana Country Club in Casa de Campo from March the 29th through to April the 1st, with the popular “ladies luncheon” taking place on Saturday March 31st.

The “MIR Bazaar” is held every year in aid of the Fundación MIR, non-profit organization and is a wonderful opportunity for Casa de Campo ladies to do a little shopping whilst also supporting a great cause! Although the bazaar is open for 3 days (from March 29th to April 1st), the most popular day to visit is on the afternoon of the “ladies luncheon” .

This year the ladies luncheon, which is by invite only will take place at Saturday lunchtime on the 31st of March with a fashion show (normally featuring Casa de Campo’s little ones as models), this year being presented by AZURRO (luxury boutique clothing store in the Marina Casa de Campo) & CASITA DE YAGO.

The MIR Bazaar and the Ladies Luncheon are an important part of the Sugar Golf tournament, not just because they keeps the ladies entertained, but also because a percentage of all sales made during the bazaar are donated to the Fundacion MIR – so we hope to see you there!

This year, the by-invitation-only Sugar Golf Tournament, one of the most exclusive and popular tournament’s in the Casa de Campo golfing calendar will be played from the 29th to the 31st of March on Casa de Campo’s most famous golf courses; the Teeth of the Dog, the Dye Fore and possibly even the newly opened Links (pending confirmation.)

[To read about and see photos of last year’s MIR Bazaar and Ladies Luncheon, click here.]

The MIR Bazaar and Ladies Luncheon 2011 – a fashionable success!

The ladies luncheon at MIR Bazaar 2011 took place on Saturday the 16th of April, hosted by Lian Fanjul de Azqueta was a super success – ladies enjoyed a shoppers paradise, as well as a delicious lunch (and a few glasses of wine) and a fashion by Sissy Bermudez modelled by the children of Casa de Campo, with the youngest model being Lyanne, the daughter of Lyanne Azqueta, the President of the Fundacion MIR.

For PHOTOS of the MIR Bazaar and Ladies Luncheon 2011 – click here!

What is the Sugar Golf Tournament?

The Sugar Golf Tournament, originally just another golf tournament, was won in 1990 by Alfy Fanjul, who subsequently donated his winnings to his sister, Lian Fanjul de Azqueta to use as seed money to found the “Casa de Paz”, which has since developed and grown into the Fundación MIR. The tournament now know as “The Sugar” incorporates golf and shooting components, the golf headed by Alfy Fanjul, the shooting headed by Pepe Fanjul, with proceeds going to the the Fundación MIR.

The prestigious tournament, which incorporates 4 evenings of entertainment as well as 3 days of golf took place from the 13th to the 16th of April 2011, with a welcome cocktail hosted by IBI Nautica in the Marina Casa de Campo, golf on the Links, Dye Fore, Teeth of the Dog and the La Romana Country Club as well as dinners at various private Casa de Campo villas.

The Sugar Shooting Tournament took place from Wednesday the 27th through to Saturday the 30th of April, with 2 days of Driven Birds Shooting in the Dominican wilderness at Rancho Religro and 3 days of Sporting Clays Shooting at the Casa de Campo Shooting Center.