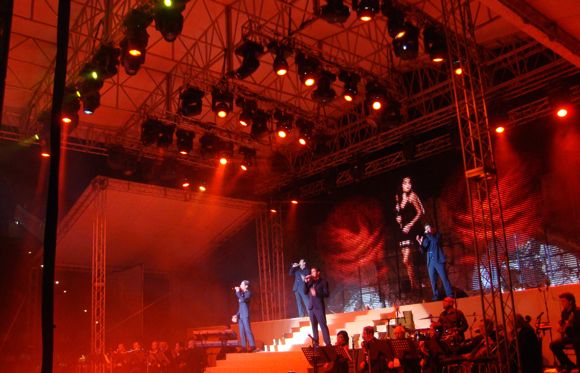 Yesterday, Saturday the 7th of November was the night to be in Altos de Chavon – not only were Il Divo playing at the Altos de Chavon Amphitheater, but every bar and restaurant had planned a special of some sort!

For us the night began at La Piazetta, which had a special ‘Il Divo’ menu and although we didn’t decide to order from the menu, the food was incredible, and eating to the beautiful music of La Piazetta’s guitarist and accordian was the perfect way to begin the evening.

Next stop was the Il Divo concert in the Altos de Chavon amphitheater – the operatic pop group created by Simon Cowell were even better than I expected, thrilling an audience of thousands of Il Divo fans, with their operatic interpretation of some of the best, most well known songs in the world.

Following the concert although a number of concert goers disappeared into the night, many flooded from the amphitheater into the bars of Altos de Chavon; Onno’s bar and Papajacks – both places were full with Il Divo fans and many more people just arriving to Altos to enjoy the parties!

Finally, as the night progressed the party moved to G & P by Praia being held at Genesis nightclub, where the club filled up with party-goers of every age, who danced the night away until dawn.

Below are a select few of our photos from all that happened in Altos de Chavon last night – we have many more to come, you’re just going to have to be patient to see the rest!