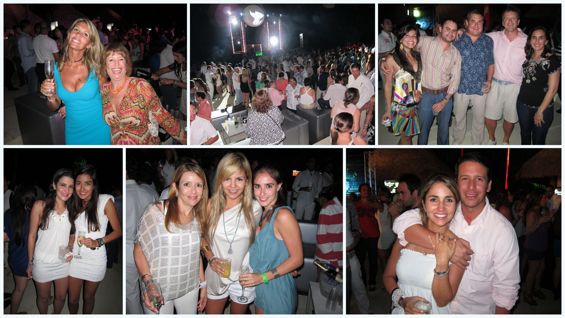 Sábado Santa, Saturday the 23rd of April was a wild day in Casa de Campo. For many it started with a boat trip to Palmilla, followed by a visit to the Casa de Campo Polo fields for the Final of the Semana Santa Polo Tournament (and a little champagne), then up to Chavón for the Victor Manuelle and Don Omar concert before we finally ended the celebrations at sunrise at the Praia Beach Party held on Playa Minitas! Wow! What a day!

Leaving the Don Omar and Victor Manuelle concert after midnight, fully hyped and in the party mood, hundreds of Casa de Campo revellers made their way to Playa Minitas for the final part of the evening’s entertainment and arrived there to find the party already rocking with more than a thousand guests bouncing, swaying, jumping and dancing to the wild music, lit by flashing white and green strobe lights.

As has now become customary, the party was located on the far end of Minitas Beach, where the BeachClub by Le Cirque has it’s VIP Cabañas, which were being used for VIP lounges for the party. The beach area had been largely covered over to create a giant dance-floor with a stage for the DJ perched impressively over the ocean – something that makes for quiet a scene at sunrise! Around the main dance floor area were a series of VIP tables, with their own supply of champagne, vodka, whiskey and other tipples, creating mini-lounges with their own seats and tables – a great place to sit and relax, except everyone was using them to stand and dance on…….much more fun don’t you know!

Before we retired our cameras for the night and got on with the busy business of dancing, we did a quick circuit of the party scene, so here are our photos:

As I said Semana Santa and especially Sábado Santa in Casa de Campo was wild, click on the links below to see articles all the other parties that we enjoyed: