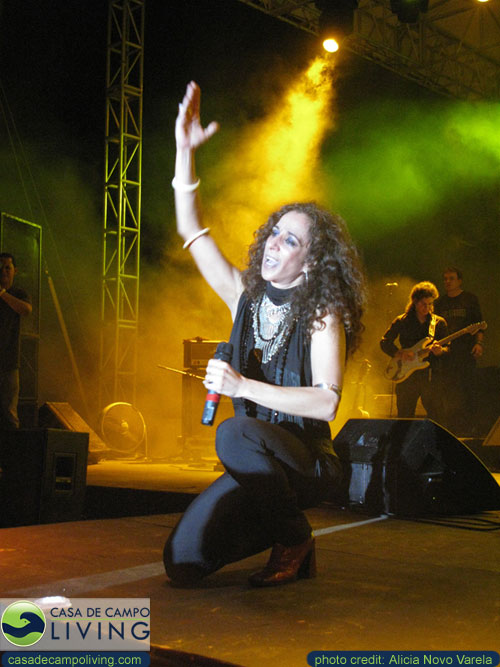 During the Gran Feria de Andalucia en el Caribe, the guests of the Feria enjoyed a wonderful and energetic performance by the Latin Grammy Award-winning Spanish gypsy singer and actress, Rosario Flores. The concert was wonderful, with a uniquely different seating arrangement that made you feel that the Rosario Flores was giving you a private concert.

Taking place within the Feria meant that there where multiple ways to enjoy the show. Special guest, VIP, General admision and Carpa Access. Special Guest and VIP where basically the same, neatly organized tables in rows varying only in the distance from the stage, but with a great view and the ability to sit and enjoy the concert with friends in an intimate and casual – but not crowded atmosphere.  The genreal seating was all the way in the back where one could enjoy the acoustics perfectly, but perhaps would straind to see the show.

The Carpas however, were the special treat.  For those who purchased o where invited to a Carpa (or tent) and had set it up as a private living room – the show literally felt like a private show in your living room. In a few particular cases, a few tents enjoyed the show with their guests while drinking and dancing to the live music of Rosario Flores in their own private areas! Can you imagine a more unique and special experience?

On a side note, as we alway take a bit of joy in pointing out mistakes (even our own) – we particularly enjoyed a new report from the Diario Libre which talked about the great concert that Rosario Flores had… in Altos de Chavon!  Surly it was an honest mistake, but we love catching these!  See for yourself: http://www.diariolibre.com/noticias_det.php?id=190670