Roberto Weill has been a long time member of the Casa de Campo community and only a few years ago also became the director and creator of Casa de Campo’s Gran Feria de Andalucia (http://www.feriaandaluciaenelcaribe.com/). This year Roberto, and a delegation of prominent Dominicans, visited the Feria de Sevilla, the fair which inspired the creation of Casa de Campo’s yearly Gran Feria de Andalucia. Roberto was invited to the fair by the government of Sevilla, in acknowledgement of his achievements with the Casa de Campo fair. The Feria de Sevilla (http://en.wikipedia.org/wiki/Seville_Fair) was 162 years old this year and draws over 5 million visitors over it’s seven day course.  One of the objectives of the Casa de Campo fair is to bring the European market to the Carribean and for the fair to be a launchpad for accessing this market, Mr. Weill’s visit to the Feria de Sevilla was a fantastic opportunity.

Whilst at the fair Roberto and the delegate were lucky enough to stay in the famous Alfonso XIII Hotel (http://www.hotel-alfonsoxiii.com), along with all the other VIPs from across the world, who were in Sevilla for the fair. The Alfonso XII was commissioned in 1928 to be Europe’s most luxurious hotel, and remains today one of Spain’s most beautiful and prestigious hotels.

During the fair Roberto and his delegation were greatly honored by everyone, and by 3 organisations in particular, which were; the Royal Club of Carriages of Andalucia, the City Council of Sevilla and the Andalucian Association of Business Enterprise.

The City Council of Sevilla honoured the Dominican Republic during the opening ceremony of the fair, which was led by the city mayor, Mr Alfredo Sanchez Monteseirin and head of the Seville fair itself, Mrs Rosa Mar Prieto. The fair officially opened on Tuesday the 28th of April at midnight with a spectacular opening ceremony, when the fair’s lights were turned on and the fair was suddenly brightly lit with thousands and thousands of light bulbs and the festivities began! The fairground, which is a vast area on the far bank of the Guadalquivir River and totally covered by rows of casetas came alive with women dressed in traditional Flamenco costumes and men in “traje corto,” partying and dancing “Sevillanas”, drinking Jerez sherry, or manzanilla wine, and eating tapas. These nighttime festivities customarily begin around 9pm and can go on as late (or early) as 6am! 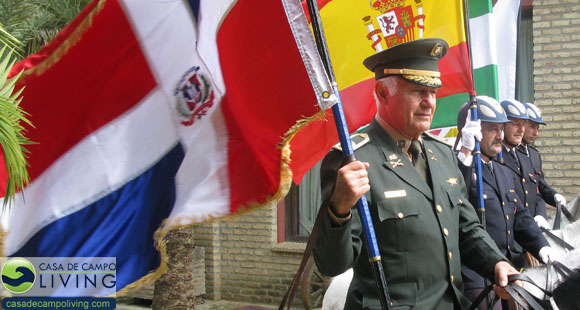 During the day, the daytime festivities began at midday when a great parade of carriages carries Sevilla’s citzens to the bullring “La Real Maestranza,” where the Royal Club of Carriages of Andalucia held their 24th carriage exhibition this year, in honor of the Dominican Republic. The Royal Club of Carriages of Andalucia, who’s honorary president is Philip the Second, the current King of Spain, also provided a magnificent carriage for Roberto and his delegate to travel to and from the fair everyday in the procession of carriages which included 700 carriages each day!

One day, Roberto and his delegate were invited to a working lunch with the board of directors of the Andalucian Association of Business Enterprise, which has more than 250,000 affiliated members, to discuss how best to conduct business in the Dominican Republic. During the lunch Eddy Martinez announced an international trading strategy based around our Casa de Campo Feria de Andalucia, so that Spain and the Dominican Republic can use each other as platforms to conduct business in the European and Caribbean markets.

Now Roberto is busy preparing the 4th Feria de Andalucia del Caribe, which will be held at the Dude Ranch in Casa de Campo next March, and will be even better and bigger than last year – an event I’m looking forward to already!