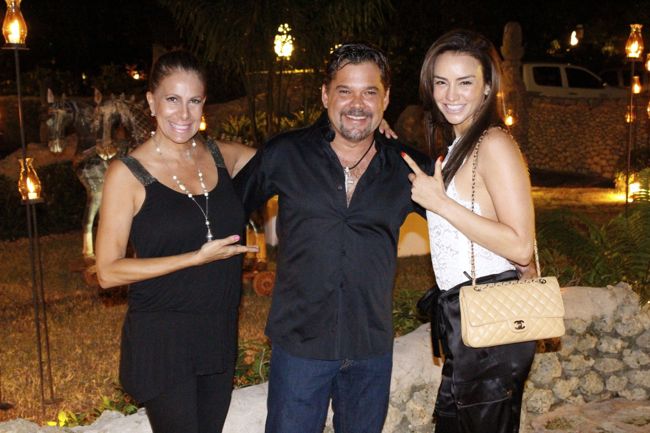 There is no better party than a birthday party… or is there? Well last Monday March 31st when the birthday party of three of our Casa de Campo community was united with the launch of a new business in Altos de Chavon, we took celebrations to a whole new level.

This is a story about Robert Garcia, Casa de Campo’s resident reality TV star, and our new favorite hairstylist. You see last Monday March 31st was Robert’s 49th birthday, and what better way to celebrate than surrounded by friends of the Casa de Campo community at his newly acquired salon – the Robert Garcia Salon at Shine in Altos de Chavon!?

You see, the flamboyant Robert Garcia, the inventor of the first hands-free blow dryer holder and star of the Style networks reality TV show Split Ends, has chosen the Casa de Campo resort as the location of his new salon.

Arriving fashionably late, our beloved Robert kick-started the celebration alongside Consuelo Matos and Yovanka Saldin. These two lovely ladies who founded Shine Concept store in December 2012 were all smiles as they handed over control of the business to it’s new owner.

Also taking part in the celebration was Mita Tenconi, owner of The Club riverside restaurant, also in Altos de Chavon and Eli Verwaay, who were both also celebrating their birthdays.

With plenty of drinks, picaderas and good friends, Robert, Mita and Eli celebrated their birthdays in great style, while also raising a toast to the start of the Robert Garcia Salon in Altos de Chavon.

While work continues on the new salon, and Robert’s endless ideas to bring us good times and good looks continue to unfold, the Robert Garcia Salon is already open. Their schedule is Tuesday to Fridays, 9am – 6pm, while on Saturdays they stay open late until 10pm with a wine bar. We’ll be sure to keep you up to date with news of the Robert Garcia Salon as it grows and evolves… some very exciting plans are coming soon!

In the meantime you can find out more about Robert Garcia, as well as watch him starring on Split Ends on his website: www.robertgarciasalon.com

The following collection of photos were taken at the Robert Garcia Salon at Shine in Altos de Chavon: