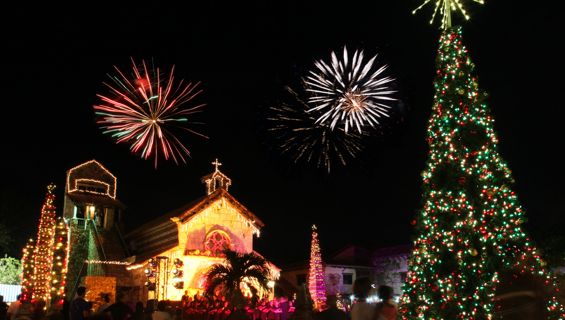 Christmas may be officially over – but until I’ve finished publishing all my photos of the Christmas celebrations (even if they are a little late) – we can still remember the good Christmas times! Christmas this year was officially opened on Sunday the 19th of December at the Altos de Chavón Christmas Tree Lighting Ceremony during the Bazaar Navideño.

The 2nd annual Christmas Tree Lighting Ceremony was the culmination and spectacular end to 2-days of festive fun, frolicks and shopping at the Bazaar Navideño in Altos de Chavón.

The ceremony, which began at 8pm was led by Claudio Silvestri, President and CEO of Premier Resorts and Hotels, who welcomed Casa de Campo’s villa owners and guests and expressed his happiness and gratitude to all present for helping Altos de Chavón cultivate such a beautiful yearly tradition. Mr Silvestri also thanked the Minister of Culture, Jose Rafeal Lantigua for his support in making the event possible.

Without further ado the grand button was pressed and Altos de Chavón came alive  with a spectacular fireworks display which coincided with the lighting of the tree and Christmas Lights – a truly breath-taking moment and one that for us in Casa de Campo signified the beginning of Christmas!

The ‘Coro Nacional’ (the National Choir) of 80 voices ended the show and the weekends festivities with a beautiful concert of Christmas carols with music that echoed all around Chavón and filled us all with Christmas Spirit!

[Also in attendance was a mysterious Toros Santa Claus: photo by Anselmo Grusso]

The following photos (as well as the headline photo) were contributed by Anselmo Grusso – many thanks Anselmo. To read more about Anselmo and his photography background, click here.

Whilst I was admittedly exhausted from 2-days at the Bazaar Navideño – I did manage to take a few photos of the Tree Lighting Ceremony myself, here they are: